Inflation is still undershooting the Fed’s annual target of 2%, which hasn’t been reached in two years. But Friday’s figures–along with other recent inflation measures–suggest prices are starting to pick up after a long period of dormancy.

Fed officials are monitoring inflation signals as they wind down their monthly bond-buying program and debate when to raise short-term interest rates. Central bank officials consider 2% inflation a sign of a healthy economic growth. The persistently low inflation of the past two years has signaled weakness.

The inflation chart (for clarity of exposition I show only the headline PCE inflation as percent year over year): 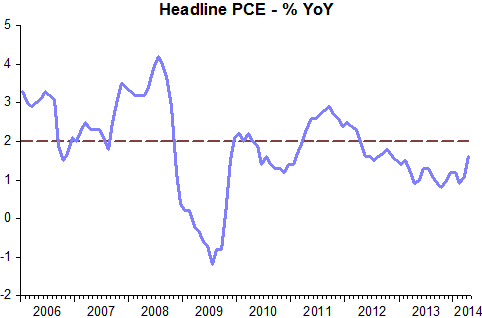 Soon after taking over the Fed Chairmanship, Bernanke is confronted with a supply (oil price) shock. Suppose (and the data show that´s approximately true) that nominal aggregate demand (NGDP) was growing “on trend” and the same was true for real output growth (RGDP). This is shown in the level charts for NGDP and RGDP below: 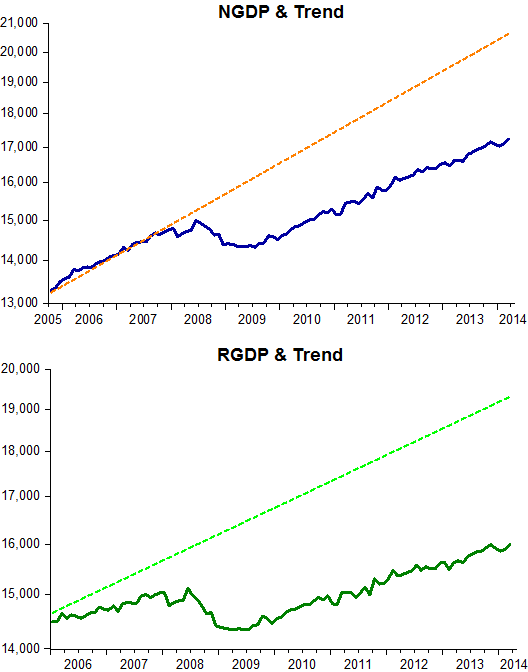 But then, for some reason, the FOMC goes berserk and decides it is its patriotic duty to combat the oil-induced increase in inflation, so it strongly and decisively contracts nominal aggregate spending (NGDP or AD). As seen in the chart NGDP drops below the trend level, with its growth rate turning negative. Real output follows suit and the economy plunges into a deep recession (dubbed “Great”).

Realizing it had botched its job, the FOMC quickly tries to “make amends”. Since its “beloved” interest rate had been brought to zero, it had to concoct what it called “unconventional policies”. From the lower level it had been taken to, NGDP begins to rise at a positive (but lower rate than before), with the same taking place with real output. But a sizeable “gap” remains.

So everyone´s happy, no? Not Market monetarists. They know that the Fed considers 2% inflation the sign of a “healthy economy”, so even the insufficient monetary “stimulus” that has been applied over the last few years will be “discontinued” once inflation approaches 2%. Since at that time nominal aggregate demand growth will remain below the previous trend growth, the same will be true for real output growth. In other words, the economy will have been permanently impoverished! So what? It´s the “New Normal” or the inevitable “Secular Stagnation”. And Central Bankers will remain “Heroes”, the guys who “saved” us from a second “Great Depression”.

Most people don´t know that not even the “Great Depression” caused a permanent impoverishment since after a number of years the original trend level for real output was attained! But in those days policymakers were not constrained by an arbitrary small number that had to be “respected” at all times!

The story just told can be summarized in a simple dynamic AS-AD model. In the graphical representation of the model, the move from point a to b represents the initial effect of the oil shock, with AD growth remaining constant. Inflation rises and real growth subsides. 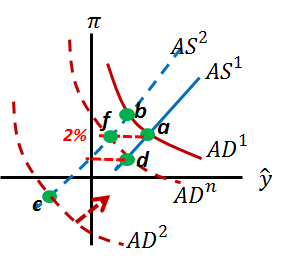 The move from b to c takes place when the FOMC goes berserk and contracts AD growth (which becomes negative). Inflation turns into deflation and real output goes deeply into negative territory.

Since then, AD growth has risen so the AD curve has shifted to the right (towards AD3).

Now, two outcomes are possible. If the AS (short-run) supply curve has shifted back to AS1, there´s no way we´ll experience 2% inflation if AD growth doesn´t rise above the 4% it has averaged over the last 4 years. We´ll end up at point d. If the SAS curve has remained at AS2 (meaning the oil shock has permanently reduced the long run potential level of the economy), the lower NGDP growth will take you to the 2% target rate of inflation, point f.

In both situations the growth rate of real output will be smaller than before (obviously more so if the economy´s potential has been permanently reduced).