Someone linked to this 2009 VoxEu piece by Lee Ohanian on Herbert Hoover and the start of the Great Depression:

What started the Great Depression? This column says that the industrial decline began before monetary contraction or banking panics – the conventional culprits – took hold. It attributes the massive drop in manufacturing hours to President Hoover’s labour policies, which kept nominal and real wages high.

Economists cite monetary contraction (Friedman and Schwartz, 1963) and banking panics (Bernanke, 1983) as important determinants of the Depression, but industry was significantly depressed before either of these factors was quantitatively important. The attached figure shows per-capita industrial hours worked between January 1929 and September 1930, and two measures of the money stock from Friedman and Schwartz that roughly correspond to M1 and M2. Hours decline substantially, but these two measures of the money supply fall only about 4%, and 1%, respectively. Moreover, there are no significant banking panics during this early stage of the Depression. Friedman and Schwartz date the first banking panic occurring from November 1930 until January 1931, but this first episode is after industrial hours have fallen 30%. Moreover, Wicker (1996) argues that this first banking episode did not have important macroeconomic effects, which he states is also consistent with the views of Friedman and Schwartz.

That´s right, money supply didn´t move much during those months and therein lays the problem. We cannot forget to talk about money supply relative to money demand. My chart shows that NGDP dropped in tandem with industrial production (I didn´t have manufacturing hours but they give out the same information). And from M*V=Py (NGDP), if M stays put but V (velocity) falls (money demand increases), NGDP will drop. The chart shows the three variables (Industrial production. NGDP and M2 velocity) indexed to 100 in January 1929. 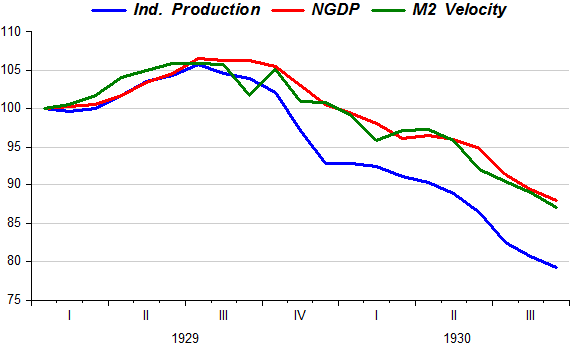 The conclusion is very different. Hoover´s labor policies certainly had a negative impact but the lion´s share of the drop in economic activity is due to the bad monetary policy pursued by the Fed, which by not offseting the move in velocity caused ‘nominal spending to ‘take a trip to the deep south’. A nominal (AD shock) reinforced the real (AS) shock with the result that the economy experienced both a depression and deflation. A chart I put up earlier today is relevant:

This result is also consistent with what happened in March 1933 when FDR ‘delinked’ from gold and the dollar devalued. Both the money supply AND velocity go up strongly. Between March and July, industrial production grew more than 50%. When NIRA came on in July, containing some of the same wage policies as in Hoover´s program, industrial production flattened, but didn´t fall and that´s because this time around monetary policy was providing stimulus. When NIRA was deemed unconstitutional in May 1935, industrial production picked up again.