Mathew Iglezias has a long post on Eurozone travails: They saved the eurozone; they just forgot to save the people. Unfortunately, the premise is faulty and that´s important because you will have difficulty to arrive at a (permanent) solution to the Zone´s problems if the root cause is badly stated. This is the problem as conventionally posed:

So what happened? Well, recall the problem. A bunch of countries that had previously been considered substantially less creditworthy than Germany joined the euro, and immediately saw a huge reduction in their borrowing costs. That led to irresponsible budgeting in Italy, a lot of private borrowing in Spain and Ireland, and a bit of both in Greece. Then after the global financial crisis hit, all these countries wound up in recession.

One year ago Michael Pettis argued better (here “Spain” is the “representative agent” for the periphery):

But this was not all. If the savings that Germany exported into Spain could not be fully absorbed by the increase in Spanish investment, the only other way to balance was with a sharp fall in Spanish savings. There are two ways Spanish savings could have fallen. First, as the Spanish tradable goods sector lost out to German competition, Spanish unemployment could rise and so force down the Spanish savings rate (unemployed workers still must consume).

Second, Spain could have reduced household savings voluntarily by increasing consumption relative to income. Higher Spanish consumption would cause enough employment growth in the services and real estate sectors to make up for declining employment in the tradable goods sector.

Not surprisingly, given the enormous optimism that accompanied the creation of the euro, the latter happened. As German money poured into Spain, helping ignite a stock and real estate boom, ordinary Spaniards began to feel wealthier than they ever had before, especially those who owned their own homes. Thanks to this apparent increase in wealth, they reduced the amount they saved out of current income, as households around the world always do when they feel wealthier. Together the reduction in Spanish savings and the increase in Spanish investment (in infrastructure and real estate) was enough to absorb the full extent of Germany’s export of excess savings.

But at what cost? The imbalance created within Europe by German policies to constrain consumption forced Spain into increasing consumption and boosting investment, much of the latter in wasted real estate projects (as happened in every one of the deficit countries that faced massive capital inflows). There are of course no shortage of moralizers who insist that greed was the driving factor and that Spain wasn’t forced into a consumption boom. “No one put a gun to their heads and forced them to buy flat-screen TVs”, they will say,

But this completely misses the point. Because Germany had to export its excess savings, Spain had no choice except to increase investment or to allow its savings to collapse, with the latter either in the form of a consumption boom or a surge in unemployment. No other option was possible.

To insist that the Spanish crisis is the consequence of venality, stupidity, greed, moral obtuseness and/or political short-sightedness, which has become the preferred explanation of moralizers across Europe begs the question as to why these unflattering qualities only manifested themselves after Spain joined the euro. Were the Spanish people notably more virtuous in the 20th century than in the 21st? It also begs the question as to why vice suddenly trumped virtue in every one of the countries that entered the euro with a history of relatively higher inflation, while those eastern European countries with a history of relatively higher inflation that did not join the euro managed to remain virtuous.

The European crisis, in other words, had almost nothing to do with thrifty Germans and spendthrift Spaniards. It had to do with policies aimed at boosting German employment, the secondary impact of which was to force up German national savings rates excessively. These excess savings had to be absorbed within Europe, and the subsequent imbalances were so large (because German’s savings imbalance was so large) that they led almost inevitably to the circumstances in which we are today.

For this reason the European crisis cannot be resolved except by forcing down the German savings rate. And not only must German savings rates drop, they must drop substantially, enough to give Germany a large current account deficit. This is the only way the rest of Europe can unwind the imbalances forced upon the region in a way that is least damaging to Europe as a whole. Only in this way can countries like Spain stay within the euro while bringing down unemployment. 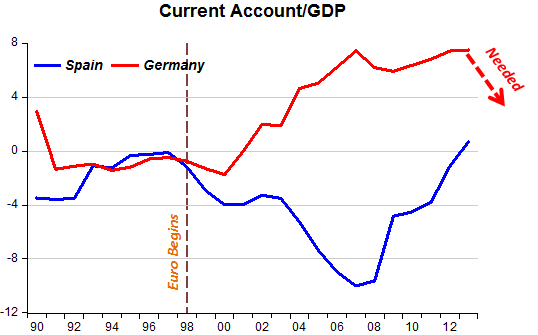 The next chart indicates that the Euro crisis was not a “Debt Crisis” but an “NGDP Crisis”, in which case more NGDP in the Eurozone is in Germany´s (and Spain´s) interest. The ECB still does not get that! 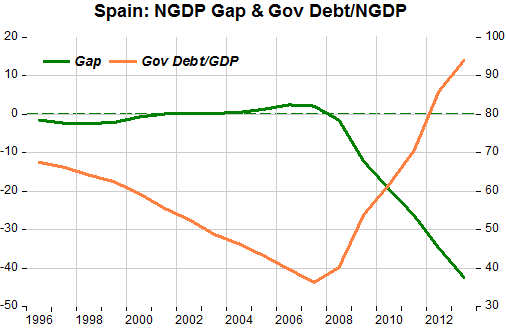 3 thoughts on “Eurozone: The solution follows from the correct premise”