Calculated Risk (Bill McBride) reposts (with updated comments) a piece from January 2013 in which he expressed “a few thoughts on the next recession”:

In addition to paying attention to incentives, we also have to be careful not to rely “heavily on the persistence of trends”. One of the reasons I focus on residential investment (especially housing starts and new home sales) is residential investment is very cyclical and is frequently the best leading indicator for the economy. UCLA’s Ed Leamer went so far as to argue that: “Housing IS the Business Cycle“. Usually residential investment leads the economy both into and out of recessions. The most recent recovery was an exception, but it was fairly easy to predict a sluggish recovery without a contribution from housing.

So right now I expect further growth for the next few years (all the austerity in 2013 concerns me, especially over the next couple of quarters as people adjust to higher payroll taxes, but I think we will avoid contraction). [CR Update: We avoided contraction in 2013!] I think the most likely cause of the next recession will be Fed tightening to combat inflation sometime in the future – and residential investment (housing starts, new home sales) will probably turn down well in advance of the recession. In other words, I expect the next recession to be a more normal economic downturn – and I don’t expect a recession for a few years.

That´s a perfect example of looking at components of Aggregate Demand (AD) to gauge the state of the economy. Why not look directly at the “most comprehensive measure of AD” – NGDP?

By not doing that he throws out that “it was fairly easy to predict a sluggish recovery without a contribution from housing”!

Not so. It was fairly easy because NGDP growth did not make up any of the level shortfall from the crash.

In fact, growth in residential investment has even returned to levels that prevailed before the crisis. But that´s unlikely to be sustained because NGDP growth is still below the pre-crisis level which indicates there´s still a wide spending gap.

We may not experience a recession, but we´re still “living inside a depression”. And beware the “inflation obsession”. It could certainly push us deeper. 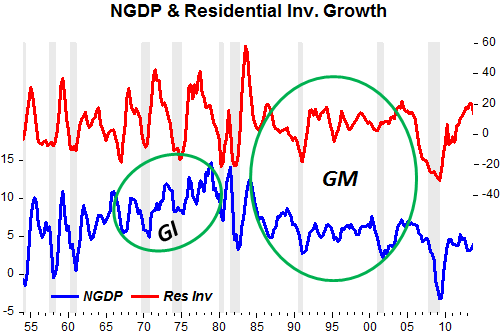