Like many people out there, I am eagerly awaiting the release of the full transcripts of the Fed’s monetary policy meetings for 2008. When they come out (and it should be very soon), you will be able to find them here. (Note: it´s out)

I expect that the media will have a field day with these. No doubt a number of Fed officials will have said things that, with the benefit of hindsight, they wish they had not said, or said somewhat differently.

Jim Bullard, president of the St. Louis Fed, recently gave a speech on the subject titled: The Notorious Summer of 2008. The slides associated with that speech are available here.

First, many people think of the financial crisis as beginning in the fall of 2008, with the collapse of Lehman and AIG. In fact, the crisis had been underway for more than a year at that point (August 2007). The fact that the crisis had gone on for over a year without major turmoil suggested to many that the financial system was in fact relatively stable–it seemed to be absorbing various shocks reasonably well. Throughout this period of time, the Fed reacted with conventional monetary policy tools–lowering the Fed Funds target rate from over 5% to 2% over the course of a year.

So what happened? Essentially, an oil price shock. By June 2008, oil prices had more than doubled over the previous year. The real-time data available to decision-makers turned out to greatly underestimate the negative impact of this shock (and other factors as well). The rapidly slowing economy served to greatly exacerbate financial market conditions.

Is that it? Are we to understand that all the misery that has followed was the result of a frigging oil shock?

In the last stretch of his tenure Greenspan also faced a quite similar oil price shock. My charts consider two 20 month periods: December 2004 to July 2006 and December 2006 to July 2008.

Before putting them up, let´s check the peculiarities as gleaned from the post FOMC meeting statements.

August 08 (a “copy-paste” of the June statement): The Federal Open Market Committee decided today to keep its target for the federal funds rate at 2 percent.

Inflation has been high, spurred by the earlier increases in the prices of energy and some other commodities, and some indicators of inflation expectations have been elevated. The Committee expects inflation to moderate later this year and next year, but the inflation outlook remains highly uncertain.

Although downside risks to growth remain, the upside risks to inflation are also of significant concern to the Committee. The Committee will continue to monitor economic and financial developments and will act as needed to promote sustainable economic growth and price stability.

And next a very quick glimpse into the transcripts (just released) for the June 08 FOMC meeting. Note that “inflation” permeates the meeting:

The tightening expected over the next year is not anticipated to begin soon. As shown in exhibits 23 and 24, options on federal funds rate futures contracts currently imply that market participants expect that the FOMC will stand pat at both this and the August FOMC meetings. Although considerable tightening is priced in over the next year, this is not unusual at this stage of the monetary policy cycle.

Exhibit 11 presents the near-term inflation outlook. As you can see in the top left panel, the recent data on consumer prices have come in a little lower than we had expected at the time of the April Greenbook. As shown on line 3, core PCE prices rose only 0.1 percent in April, and based on the latest CPI and PPI readings, we expect an increase of 0.2 percent in May. As a result, we have marked down our estimate of core PCE inflation in the second quarter by 0.3 percentage point, to an annual rate of 2 percent. Total PCE prices (line 1) have risen at a substantially faster pace than core prices; but here, too, the current-quarter forecast is a little lower than in our previous projection, both because of the lower core inflation and because the sharp increases in oil prices have been slow to feed through to finished energy prices.

Despite this recent news, we expect inflation to rise sharply over the next few months. In part, this reflects our judgment that core prices were held down in the first half by some factors that will not persist into the second half. In addition, as shown to the right, we expect increases in food and energy prices to push up the twelve-month change in the total PCE price index more than 1 percentage point over the next several months, to about 4½ percent.

Regarding inflation, every single participant with the possible exception of Mishkin, showed grave concern. This is reflected in Bernanke´s summary:

My bottom line is that I think the tail risks on the growth and financial side have moderated. I do think, however, that they remain significant. We cannot ignore them. I’m also becoming concerned about the inflation side, and I think our rhetoric, our statement, and our body language at this point need to reflect that concern. We need to begin to prepare ourselves to respond through policy to the inflation risk; but we need to pick our moment, and we cannot be halfhearted. When the time comes, we need to make that decision and move that way because a halfhearted approach is going to give us the worst of both worlds. It’s going to give us financial stress without any benefits on inflation. So we have a very difficult problem here, and we are going to have to work together cooperatively to achieve what we want to achieve.

The last thing I’d like to say is on communications. Just talking about communications following this meeting, I’d like to advise everyone, including myself, to lean, not to lurch. That is, we are moving toward more concern about inflation, but we still have concerns about economic growth and financial markets. We should show that shift in emphasis as we talk to the public, but we should not give the impression that inflation is the entire story or that we have somehow decided that growth and financial problems are behind us, because they are not. So if we can convey that in a sufficiently subtle way, I think we will prepare the markets for the ultimate movements that we’re going to have to make.

Unfortunately, and that was to be expected, the “public” gathered that inflation, if not the entire story, was the major part. In the Minutes of that meeting we read that “likely the next move in interest rates will be up”!

Now, contrast the statement from that meeting with the one from September 2005, chaired by Greenspan:

Sep 05: The Federal Open Market Committee decided today to raise its target for the federal funds rate by 25 basis points to 3-3/4 percent.

Output appeared poised to continue growing at a good pace before the tragic toll of Hurricane Katrina. The widespread devastation in the Gulf region, the associated dislocation of economic activity, and the boost to energy prices imply that spending, production, and employment will be set back in the near term. In addition to elevating premiums for some energy products, the disruption to the production and refining infrastructure may add to energy price volatility.

While these unfortunate developments have increased uncertainty about near-term economic performance, it is the Committee’s view that they do not pose a more persistent threat. Rather, monetary policy accommodation, coupled with robust underlying growth in productivity, is providing ongoing support to economic activity. Higher energy and other costs have the potential to add to inflation pressures. However, core inflation has been relatively low in recent months and longer-term inflation expectations remain contained.

The Committee perceives that, with appropriate monetary policy action, the upside and downside risks to the attainment of both sustainable growth and price stability should be kept roughly equal. With underlying inflation expected to be contained, the Committee believes that policy accommodation can be removed at a pace that is likely to be measured.

A big difference in the two statements, to my mind, is Greenspan´s emphasis on “appropriate monetary policy action”. That´s certainly an elusive concept, but maybe a much better form of “communication” than the “lean not lurch” style proposed by Bernanke. 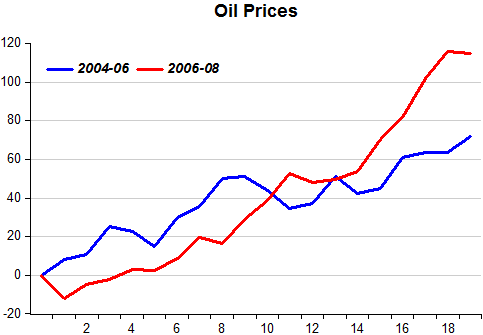 The 2004-06 shock is initially stronger than the 2006-08 one. Over the 20 month period the big difference between the two shocks shows up in the last three months.

There´s no quantitative or qualitative difference in the behavior of core inflation in the two periods. Why did Bernanke ignore the signals from core inflation?

Interestingly, to Greenspan longer term inflation expectations were contained. To Bernanke they appeared to be elevated. The drop in long term inflation expectations halfway through the 2006-08 period is quite consistent with the Fed´s demonstrated concern with inflation and is also indicative that, contrary to the Fed´s (and conventional) wisdom, monetary policy was “tightening”! Note that the Fed stopped reducing rates in the April meeting and they remained at 2% all the way to October 6 (that´s 3 weeks after Lehmann)!

As Bullard notes, “The fact that the crisis had gone on for over a year without major turmoil suggested to many that the financial system was in fact relatively stable–it seemed to be absorbing various shocks reasonably well.”

But as soon as the Fed “tightens”, unemployment starts going up. The next chart shows this clearly.

In December 07, by lowering the Fed Funds rate by only 25 basis points, less than the market expected (and showing concerns with inflation), monetary policy goes into tightening mode. The spending (NGDP) gap reacts almost instantly and soon unemployment picks up.

Bottom line: The oil shock of 07-08 was a trigger for the Fed´s actions. And these actions were inimical to the health of the economy, already weakened by the fall-out of the house price bust. It is clear from the statements, minutes and now transcripts for 2008 that the Fed´s focus was on headline inflation, and since that was being significantly impacted by oil prices, the “public” anticipated monetary policy tightening (a rise in rates). No wonder NGDP dropped significantly (plunging after July 08).

Contrast the Fed´s actions and reactions in 2008 to those that took place in 2005, also during a significant rise in oil prices.

The behavior of NGDP (here represented by the gap relative to the great moderation trend) is consistent with my view that the Bernanke Fed grossly mismanaged the monetary policy process and should take major responsibility for the macroeconomic consequences that followed.

Update: The verdict on “inflation obsession” is in:

We plugged all 1,865 pages of central-bankery into a computer programme and came up with a few extremely informative nuggets.

First, there is only one winner in the dual mandate. The word “inflation” (or variants thereof, such as “inflationary”) was mentioned a cool 2,664 times in 2008; “unemployment” pops up just 275 times. (After saying “inflation” a few thousand times it begins to sound funny.Inflation.)

20 thoughts on “The 2008 transcripts confirm: The Fed´s obsession with inflation “crashed” the economy”