Information received since the Federal Open Market Committee met in December indicates that growth in economic activity picked up in recent quarters.

The Committee expects that, with appropriate policy accommodation, economic activity will expand at a moderate pace and the unemployment rate will gradually decline toward levels the Committee judges consistent with its dual mandate.

The Committee recognizes that inflation persistently below its 2 percent objective could pose risks to economic performance, and it is monitoring inflation developments carefully for evidence that inflation will move back toward its objective over the medium term.

If incoming information broadly supports the Committee’s expectation of ongoing improvement in labor market conditions and inflation moving back toward its longer-run objective, the Committee will likely reduce the pace of asset purchases in further measured steps at future meetings.

To the Fed it seems that the word “broadly” defines something as wide as the Pacific Ocean!

The fact is the economy seems to be in a situation in which “plus ça change, plus ça reste le même”!

Over the last four years, real output (RGDP) has grown at the paltry rate of 2.3% (far from enough to bring RGDP back to anywhere near the ‘centenary trend’). If you take out inventory accumulation and consider Real Final Sales of Domestic Product, growth is even weaker, 1.9%. Notice that in the last four years nothing has changed, i.e. there´s no incipient trend forming that could lead the FOMC to conclude that “growth in economic activity has picked up”. 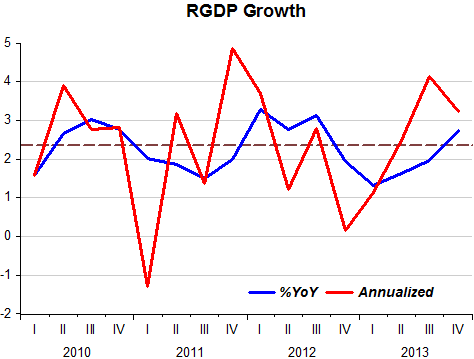 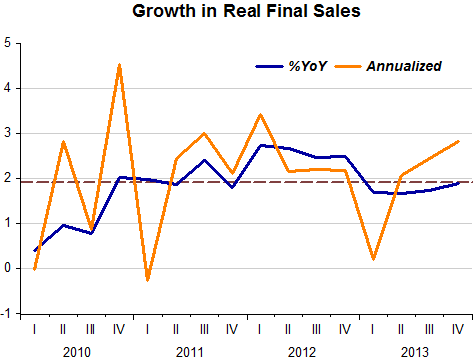 With each new data point it seems that Bernanke´s ‘legacy’ will be having introduced a ‘unit root’ in the RGDP series.

With regards to NGDP, growth in the last four years has averaged 4%. After dropping through the floor in 2008-09, NGDP has been growing quite a bit below the 5.5% observed during the 20 years of the “Great Moderation”. 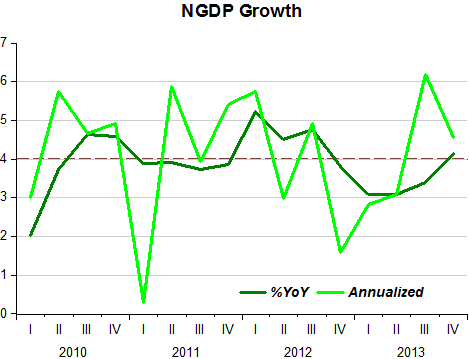 And I really don´t have a clue as to what sort of “monitoring” the Fed is doing on inflation because it has been moving in the “wrong direction” for the past three years!

But some are optimistic. At Econbrowser, Jim Hamilton agrees with the FOMC: ” U.S. economy gaining momentum“:

The Bureau of Economic Analysis announced today that U.S. real GDP grew at a 3.2% annual rate in the fourh quarter. That’s two quarters in a row now of above average growth. Given recent experience, that sounds pretty good.

At the end he shows that his “recession probability indicator” is “at rest”: 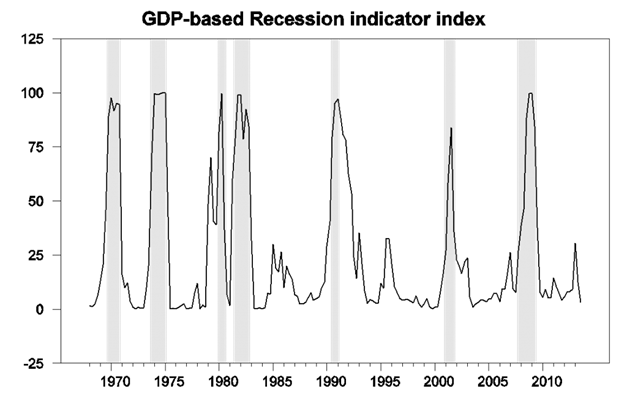 What this misses is the fact that we are in a depression (albeit not “great”). To get a recession within a depression blunders committed in 1937 (by the Fed hiking required reserves and by the Treasury sterilizing gold inflows) would have to be repeated!

In other words JH is satisfied with the “new normal”!