According to Gavyn Davies, the Eurozone is a whole different galaxy:

Many of the economic symptoms displayed by the euro area in recent months suggest(!) that monetary conditions have remained overly tight, despite a reduction in policy rates in May, and Mr Draghi’s limited use of forward guidance in July. Nominal GDP is rising at only 1 per cent per annum, which is nearer the Japanese than the American rate. Unemployment has been rising along with the exchange rate, and the central bank’s balance sheet has been declining rapidly. Excess liquidity held by the banking sector at the ECB has fallen by over E600 billion in about a year. Broad monetary growth has been subdued, with credit to the corporate sector continuing to decline at an annual rate of -5 per cent.

Most central banks would take these symptoms as proof that monetary policy should be eased, and eased significantly. But the ECB has always ploughed its own furrow. Although the Governing Council may well be ready to indicate on Thursday that a 25 basis points reduction in policy rates is in the offing, there is no sign that they think that a more drastic re-appraisal of their monetary stance is appropriate. If the central bank is in the wrong ball-park for monetary conditions, it seems to have every intention of staying there.

I have my doubts that “most central banks would take these symptoms as proof that monetary policy should be eased”. Most of them have behaved very badly (excepting the BoJ). Maybe in the dire conditions faced by the Eurozone they would act. This just shows how ‘unplugged’ the blokes at the ECB are!

Given the charts below, they must be radically blind not to see how tight monetary policy is. To everything there´s a limit and the ECB has long passed the ‘stupidity threshold’! 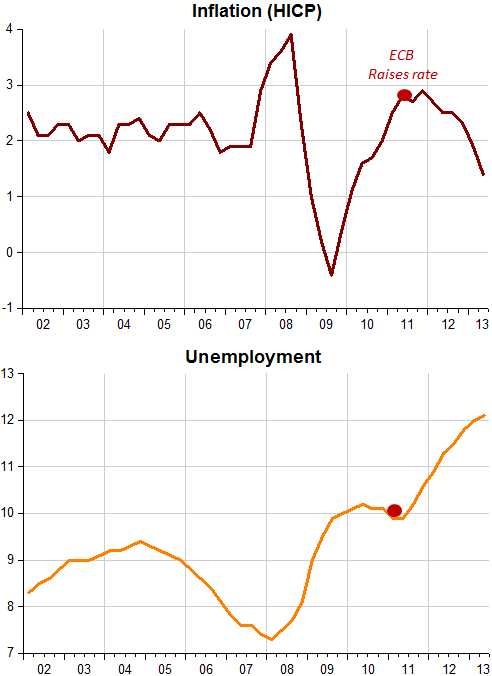 2 thoughts on “How disconnected can you be?”