With so much slack in the economy and so many Americans still looking for jobs, why hasn’t inflation been falling further? University of Texas Professor Olivier Coibion and Berkeley Professor Yuriy Gorodnichenko propose an answer in an interesting new research paper.

The diagram below, taken from Coibion and Gorodnichenko (2013), updates the above analysis. Here the blue circles summarize data over 1960:Q1-2007:Q3, with the inflation surprise again the variable on the vertical axis as in the previous figure. The expectations-adjusted Phillips Curve seemed to do a reasonable job of capturing an important feature of the data over the half century that followed publication of Phillips’ original article. 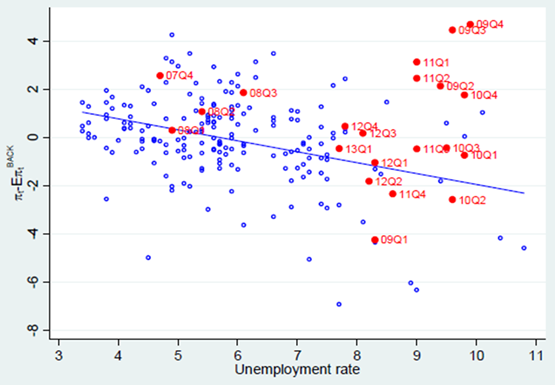 But as one can see from the red circles in the graph above, the expectations-adjusted Phillips Curve again seems to be missing over the last 5 years, with the observed inflation rate higher than predicted. Coibion and Gorodnichenko (2013) explore a number of possible explanations for this, including structural instability and changes in the labor market. They suggest that the best explanation is a divergence of different measures of the “expected inflation” that serves as a shift factor for the Phillips Curve. Using either the last-year’s average adjustment used in the above figures, or looking at expectations of inflation implied by the yields on Treasury Inflation Protected Securities, or expectations from the Survey of Professional Forecasters, one always finds recent inflation to have been higher than predicted by the historical Phillips Curve. But Coibion and Gorodnichenko note that these measures of expected inflation have recently diverged from the answers given by those households who are sampled in the University of Michigan’s survey of consumers. Those respondents have been consistently saying that they expect a higher inflation rate than the value implied by TIPS or professional inflation forecasters.

Coibion and Gorodnichenko also have a hypothesis about why many consumers have a different assessment from financial markets and professional forecasters: regular consumers seem to be paying more attention to what’s been happening to oil prices. Perhpas this is because most Americans see gasoline prices prominently posted on a daily basis, and many of us experience its direct effects on our purchasing power immediately after any change in the price.

And the bottom line:

The phenomenon identified by Coibion and Gorodnichenko would undermine the Fed’s ability to stimulate the economy in a number of important respects. First, it makes it much more difficult for the Fed to try to justify its actions to the public on the grounds that inflation is currently too low. Second, if makes it harder for the Fed to stimulate the economy without raising inflation, particularly if one byproduct of stimulus efforts is an increase in the relative price of oil. Third, it implies that ex ante real interest rates, if we base that concept on the perceptions of large numbers of economically important decision makers, are extremely negative at the moment, casting doubt on the claim that a primary policy objective should be to make them even more negative.

The “inflation trap” is so strong that it is even no use “talking” about inflation or how different segments develop expectations of inflation!

The next two charts include the year on year increase in oil prices and the level of oil prices (C&G´s measure). In the top chart while the pre 2008 difference in inflation expectations before the crisis averaged 0.7 percentage points, the rise in oil prices averaged 24%, these averages for the post crisis period were 1.6 pp and 13%.

In the bottom chart we see that although the level of oil prices has been relatively stable for the past two and a half years, the divergence in inflation expectations bounces about like a ‘cat in hot water’. 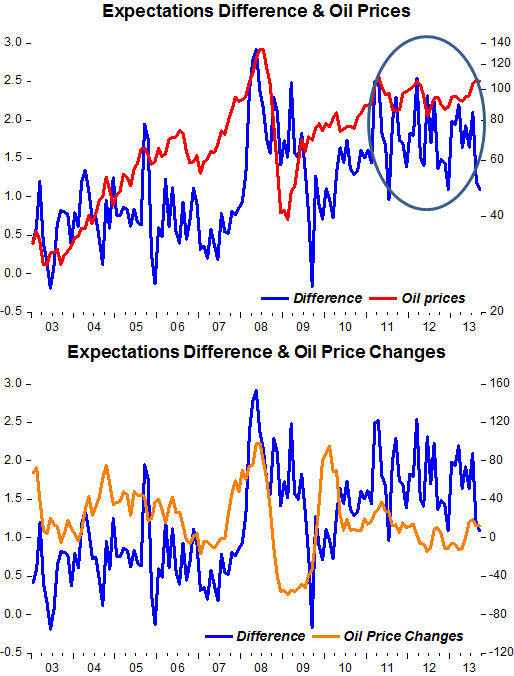