According to Giles Wilkes: “Implicit in Ambrose E-P: Nominal GDP growth is what matters. All else is secondary”:

As ever, it is the ECB flouting the rulebook for political reasons. You could say it has a chronic German bias. It stoked double-digit money growth to nurse Germany through the slump in the early EMU years, accomodating a dovish Bundesbank, and dooming over-heated Club Med to its fate. This time the Bundesbank is in a hawkish mood, fretting that house prices in Berlin, Stuttgart and Munich are overvalued by as much as 20pc. Perhaps they are, but average rises across Germany have been 2.8pc annually over the past three years, with no signs of a blow-off. Even if there were, Germany could cap rises by clamping down on mortgages.

In any case, Germany’s own HICP inflation (at constant taxes) has been almost flat since March. The anti-inflation taskmaster may soon be on the cusp of deflation itself, the ultimate irony, but no less dangerous for that.

As readers know, I have long argued that France, Italy, Spain and Club Med allies should gang up in the ECB’s governing council and dictate terms, forcing through the reflation policy that the region so desperately needs. They have the votes. They have the legal and treaty authority to do so. Most monetary theorists around the world would egg them on. Yet they seem paralysed, terrified that Germany will storm off and revert to the D-Mark. They should screw their courage to the sticking plate and call Berlin’s bluff. Should Germany indeed walk out – and inflict crippling loses on its own banks and insurers in the process – this would at least be a solution of sorts. By lancing the boil, it would open the way for a return to growth.

Instead Europe seems to have abdicated leadership, praying for another decade of global growth to lift them off the reefs. This may happen but it is far from assured, and it is not a grown-up policy for the world’s second biggest economy. The cycle committee of the Centre for Economic Policy Research still refuses to rule that Euroland is out of recession. Industrial output has been treading water through the summer.

All it needs is one nasty surprise – and there are many lurking, in China and the BRICS – and Europe will lose its monetary foothold. As the Japanese learned the hard way, once you let deflation lodge in the system, it takes heaven and earth to get out again. 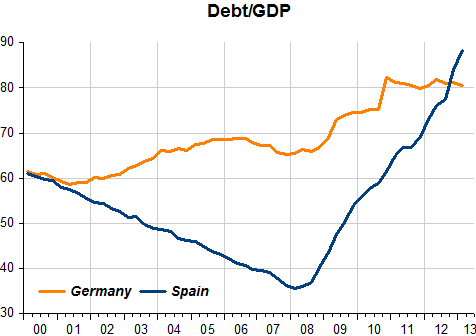 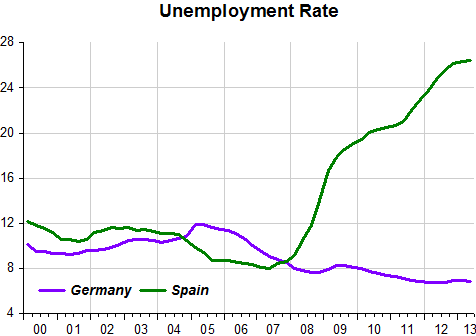 One thought on ““Screw your courage to the sticking plate””