According to the WSJ: “Proactive Central Bank is Behind Australia´s Rebound”:

Australia’s economy is showing signs of a tentative recovery — and the country’s central bank deserves much of the credit.

A year ago, Australian newspaper headlines were full of recession warnings as iron ore prices fell sharply and the mining industry convulsed. The economy grew 2.6% on-year in the second quarter, down from growth rates as high as 4% early last year. Economists predict respectable but not spectacular growth next year.

Now, several recent indicators are spurring hope that the slowdown is ending.

Australia is one of the very few countries that didn´t tank with the onset of the “Great Recession”. In fact Australia´s last recession was in 1991!

The RBA has certainly done a better job than most central banks, particularly by not letting nominal spending tank like it did in the US, UK, Japan and the Eurozone. Australia was not explicitly targeting NGDP but it would have performed even better if it was.

The chart shows Australia´s NGDP and trend following the 1991 recession. 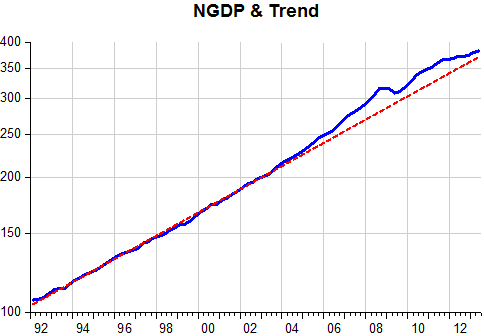 Note that after 2005 NGDP growth trends up, with NGDP remaining above the trend level. This is clearly shown in the NGDP and RGDP growth chart below.

If the RBA hadn´t been excessively expansionary after 2005, it wouldn´t have needed to contract spending growth when the international crisis hit. Anyway it deserves kudos for trying, and essentially succeeding, to bring NGDP back to trend. This is something other countries like the US and UK are still far away from achieving!

Australia also provides a good example of why interest rates are not a good indicator of monetary policy.

The chart shows that despite the rise in rates in 2005-06 monetary policy (MP) was still ‘loose’. One indication of that is the rising NGDP growth we saw above. Another indicator that monetary policy was ‘loose’ is provided by applying the “Export Price Norm” (EPN) (see Lars). 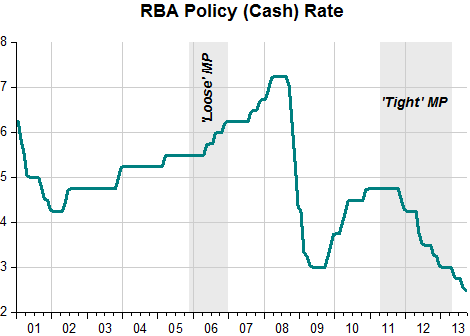 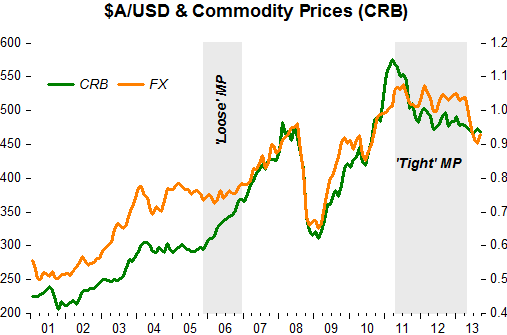 Hopefully, now that it´s essentially back to the trend level path, the RBA will manage to stabilize NGDP growth, confirming the perception that the “slowdown is ending”..

4 thoughts on “Paying ‘homage’ to the RBA”