There are two reasons for that discrepancy. First, the stock market drop that actually occurred was not a single shock of 30%, followed by a smooth downward decline: it was a sequence of positive and negative shocks. In my view, the stock market recovered, in large part, because of the policy of Quantitative Easing pursued by the Federal Reserve. In the absence of that policy response, I conjecture that the path of unemployment depicted in the simulation is a good forecast of what might otherwise have occurred.

In Farmer´s view the Stock Market caused the Great Recession!

As in Farmer (2012b), I conclude that the stock market crash of 2008 really did cause the Great Recession.

For long he has been an advocate of the Fed targeting stock prices (here, here, here). Unfortunately his thesis does not hold sway. The charts show stock prices (S&P) and unemployment in 1987-89 and 2007-13. Although the 1987 stock market crash was deep (the largest percentage one day drop in the stock prices) unemployment kept on falling.

QE1 was likely a “life-saver”, but also indicates that the basic problem, the cause of the crash, was bad monetary policy, which allowed nominal spending to ‘crash’. 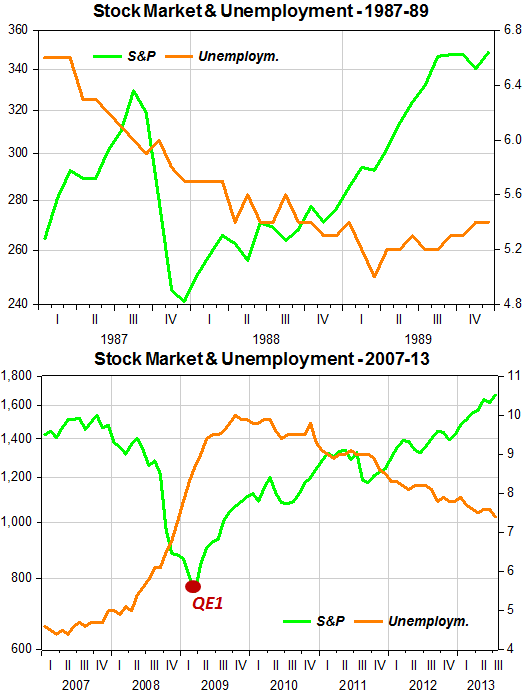 4 thoughts on “Did the stock market crash really cause the Great Recession?”