That’s one downside: Cheap money is hard to reverse gracefully. The larger problem is that central banks are trying to do things beyond their powers. Says Stephen Cecchetti, the chief BIS economist: “Monetary stimulus alone cannot put economies on a path to robust, self-sustaining growth, because the roots of the problem preventing such growth are not monetary.” In the annual report, he argues that low interest rates might even be counterproductive. They make it easier to finance large budget deficits and may delay needed, though unpopular, cuts. (Created in 1930 to help settle World War I debts, the BIS now serves mainly as a forum for international financial cooperations.)

Cecchetti’s preference for deficit reduction is controversial; economists disagree about the need to cut deficits. But his main point is correct and may be understated. Cheap money can’t rescue the global economy. Indeed, though no one dares say it, there may be no plausible set of policies to neutralize all the forces retarding growth.

I wonder how the steep drop in NGDP at about the same time in a large swath of developed economies can be said NOT to be a monetary problem. In their charts (reproduced below) that´s exactly what the BIS shows. And in the case of the Eurozone and the UK, things have turned to the worse more recently.

As Mark Sadowski put it in the comment section of the previous post on the BIS Report:

So *the* international organization of central banks has officially adopted the point of view that central banks are totally useless?

Why don’t they just call it a day and disband?

And as Geoff, back at Scott´s blog, in a rare moment of good humor indicates, Benjamin Cole reminds him of this kid: 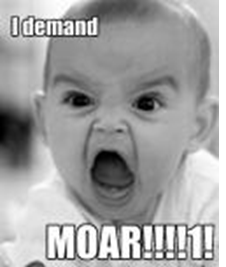 Related Post: The BIS Chief-Economist has been saying the same thing for at least two years

7 thoughts on “More on the BIS Annual Report”