This post is Part 1 of two posts in which I respond specifically to his remarks on Japan’s Lost Decade:

Moreover, in all of the above countries, not only household sector but also the corporate sector is increasing savings or paying down debt at these record low interest rates. This behavior of the corporate sector runs totally counter to the conventional framework of neoclassical economics where profit maximizing firms are expected to be increasing borrowings at these record low interest rates.

Private sectors in all of these countries are increasing savings or paying down debt because their balance sheets were damaged badly when asset price bubbles burst in those countries. In the case of Japan, where the bubble burst in 1990, commercial real estate prices fell 87 percent nationwide (Exhibit 4), destroying balance sheets of businesses and financial institutions all over the country.”

The Bank of Japan has financial transactions data going back to 1964. Where more than one data series was available (1998Q1-1999Q1) I have used the more recent series. The following is a graph of calendar year averages of the financial surplus as a percent of GDP for the non-government sector (which includes public financial institutions and corporations), general government and the rest of the world:

As can be seen the non-government sector was in significant financial surplus from 1993 through 2005, averaging 8.9% of GDP. The largest swing towards surplus occurred between 1990 and 1998, going from 0.5% of GDP to 12.6% of GDP with both ratios being the extreme values for the calendar year averages.

Before moving on, note that the non- government sector was also in significant financial surplus from 1975 through 1986, averaging 7.9% of GDP. This was period of significant disinflation in Japan with consumer price inflation falling from 23.2% in 1974 to 0.6% in 1986. There were recessions in 1973-75, 1977, 1980-83 and 1985-86 and the IMF’s estimates of Japan’s output gap, which only start in 1980, show Japan below potential output through 1987, with the output gap in 1980 (6.5%) being nearly as great as in 2009 (6.8%). Aside from the absence of asset price bubbles the primary difference between this period and the more recent period is that nominal GDP (NGDP) growth rates, inflation and interest rates were higher, with the NGDP growth rate, GDP implicit price deflator inflation rate and the call rate averaging 8.1%, 3.7% and 6.9% respectively during 1975-86 as compared to 0.4%, (-0.8%) and 0.6% during 1993-2005. So interest rates were much higher, but nominal growth rates were also much higher, and thus the interest rate channel of the monetary transmission mechanism had plenty of space with respect to the zero lower bound.

The next graph shows the non-government sector financial surplus disaggregated between the household/nonprofit sectors (what the Japanese term the “personal” sector, and which itself is only available in disaggregated form for 1998Q1 on) and what Koo terms the “corporate” sector (the financial and non-financial sectors combined):

Given the substantial structural differences between the balance sheets of the financial and non-financial sectors I find it curious that Koo lumps the two together under the “corporate” nametag. Here is a graph of the corporate sector financial surplus disaggregated between these two sectors: 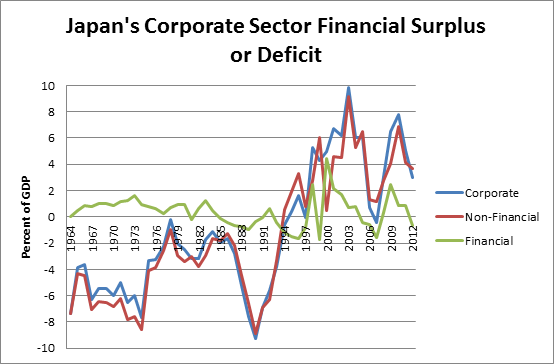 Koo refers to the effect of the decline in land and share prices in his Exhibit 4 (“Cumulative Loss of Wealth on Shares and Real Estate ~ ¥1500 Trillion”). Stock data for Japan’s non-financial assets are available on a calendar and fiscal year basis from the Cabinet Office from 1969 and thus complete Japanese balance sheet data is only available at an annual frequency. Again, where multiple series are available (1980-1998 and 2001-2009) I have used the more recent series.

As long as we’re talking about the effect of the decline in land and share prices on balance sheets perhaps we should take a closer look at the “87%” figure for the decline in commercial land to which Koo refers. The index he is referring to is the Japan Real Estate Institute Urban Land Price Index for Commercial Land in Six Major Cities. “Six Major Cities refers to the ku-area of Tokyo, Yokohama, Nagoya, Kyoto, Osaka and Kobe. And while no doubt these cities are very important the Real Estate Institute also has All Urban and All Urban except Six Major Cities commercial land price indices that make it clear that the index for the 6 major cities is not very representative of the boom and bust in urban commercial land prices in Japan: 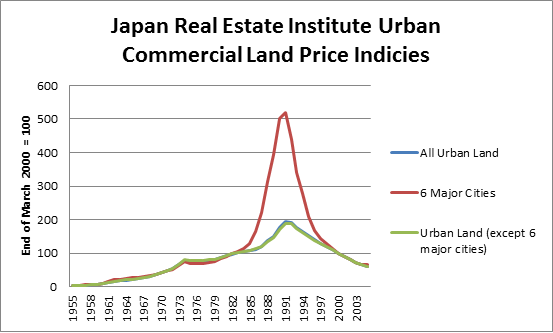 In any case, what I hope I’ve shown so far is that the shift in Japan’s non-government financial surplus by itself is not a new phenomenon, and that its more recent occurrence has been almost entirely due to the non-financial portion of what Koo terms the “corporate” sector. In addition I think it’s clear that Koo greatly exaggerates the damage to the Japanese corporate sector balance sheet from the decline in asset prices.

Another important question to answer is whether there is in fact any evidence that the degree of leverage has any relationship with the non-financial corporate sector financial surplus. Given we are talking about the supposed effect of an asset price decline induced increase in leverage on sector financial flows, there’s really only two simple coherent ways of measuring leverage in this context. The following is a graph of the ratio of liabilities to assets by sector:

And here is a graph of the difference between assets and liabilities (i.e. net worth) as a percent of GDP by sector:

Fortunately we don’t have to guess, we can always check for a statistical correlation. Here’s the graph of non-financial sector financial surplus regressed on liabilities as a percent of assets: 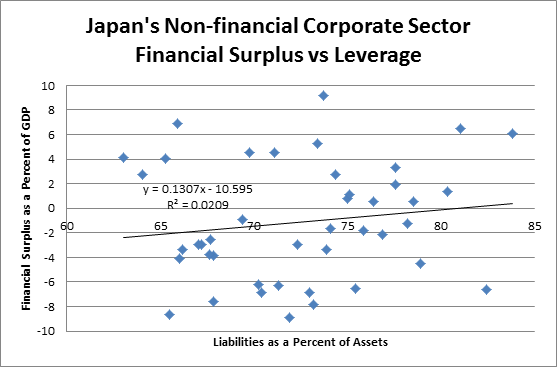 And here is non-financial corporate sector financial surplus regressed on net worth as a percent of GDP: 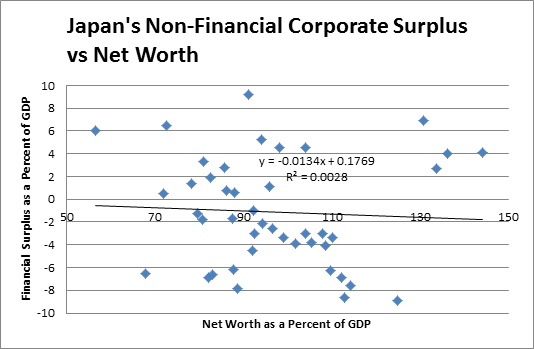 Needless to say neither of these relationships is even remotely statistically significant. 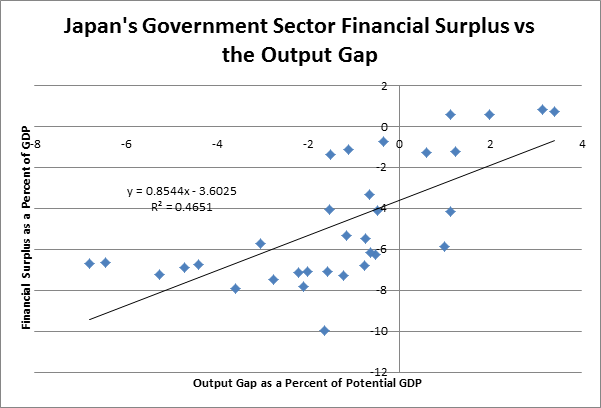 This is statistically significant at the 1% level. And it’s of greater statistical significance than the correlation between the non-government sector financial surplus and the output gap (which is only one of two residuals): 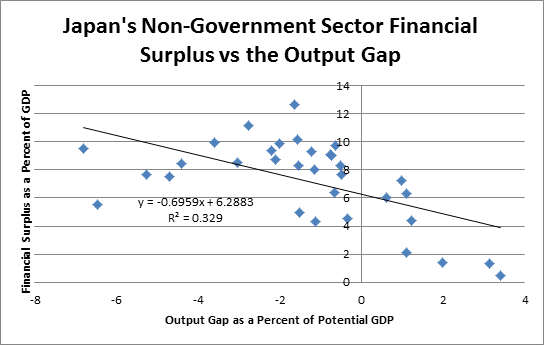