In an interesting post where he proposes the idea that airport security may be a good indicator of a country´s development, Lars ends on a ‘low note’:

I am less positive on the near-term outlook for Poland. Polish monetary policy has been excessively tight since early 2012. As a consequence the Polish economy is now seeing a sharp slowdown in growth. See my later forecast on the Polish economy here.

Given that Poland, together with Australia, were the ‘poster child’s for what a successful monetary policy looked like during the crisis, that´s unwelcome news. But it also serves as a reminder of the importance of getting monetary policy ‘right’, reflected in the behavior of NGDP.

Below I have some charts for both Poland and Sweden. While Poland avoided the deep recession that spread throughout the world, Sweden was a good example of how ‘competent’ monetary policy could ‘undo the damage’.

After a big drop in 2008, by the end of 2010 NGDP was a ‘whiskers distance’ from reaching the trend level. For some reason, the Riksbank, Sweden´s central bank, though it wise to ‘step on the spending brake’.

Meanwhile, in Poland, spending growth had relented from the high rates experienced before the crisis hit and was approaching the trend from above, remaining very close to trend in 2010 and 2011. For some reason, since early last year the National Bank of Poland also reduced ‘speed’ and NGDP undershot the trend level.

From the inflation chart, it seems both countries reacted to a spike in inflation, with Sweden being even more ‘paranoid’, stepping on the brakes as soon as inflation crossed above the zero line! 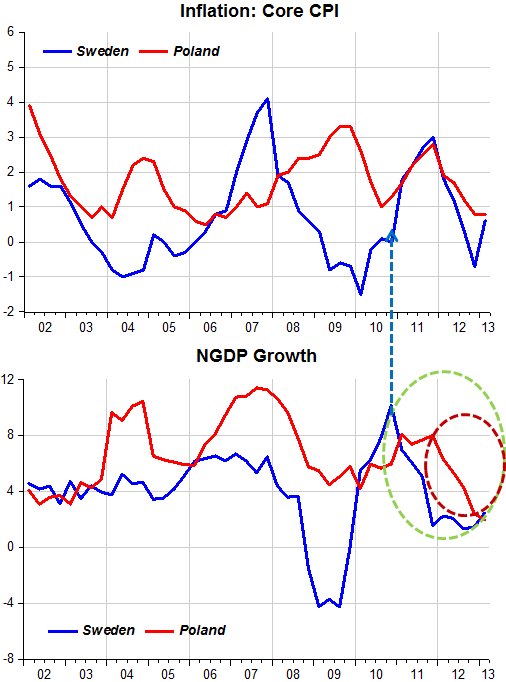 The outcome is what one would expect. Real growth falls sharply and inflation is now far below ‘target levels’. Interesting to note that while central banks are quick to ‘pull the brakes’ when inflation, even if only slightly, goes above trend, they practice ‘patience’ when inflation is way below trend, as this quote from a Fed dove speaking in Sweden indicates:

Williams noted that underlying inflation was at 1 percent, below the Fed’s target of 2 percent. Speaking on the sidelines of a seminar in the Swedish capital, he said he saw temporary factors as being the main reason inflation was being held low and expected the inflation rate to return to 2 percent. 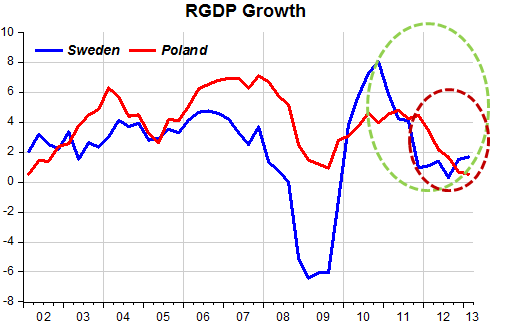 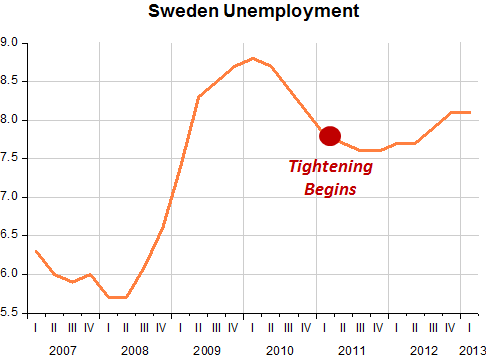 With such a show of incompetence by the Riksbank, no wander Svensson quit!

One thought on “Did Sweden and Poland fall prey to ‘inflation blues’?”