I believe the the main reason for the recent drop in Japanese inflation expectations has to be blamed on BoJ’s clumsy handling of the fact the Japanese bond yields have started to rise.

Hence, comments from Bank of Japan officials – including Mr. Kuroda – indicates that BoJ is trying to achieve the impossible – monetary easing without higher nominal bond yields. That is creating the confusion about the BoJ’s objectives, which have caused inflation expectations to plummet.

That conclusion is corroborated by the facts. The charts below plot inflation expectations against, respectively, the exchange rate (Yen/USD), the Nikkei Stock Index and the 10 year Government Bond Yield.

It appears that inflation expectations drive the process, only natural given the 2% inflation target and Abe´s (initial) credibility.

But note that as soon as the bond yield jumps after May 9, things went ‘wobbly’. While yields on the long bond remained low/falling, it was ‘smooth sailing’. Let´s hope the BoJ ‘clarifies’ it´s objectives and give up on the ‘conventional’ view that the objective of QE-like strategies is to lower longer term rates (a mistake Bernanke has made in the lauch of every QE!). 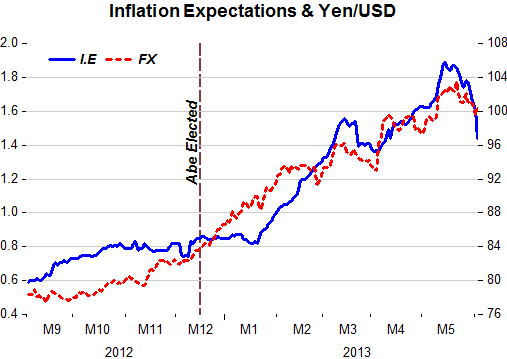 One thought on “A visual take on Japan”