Still, three important developments may lift the economy despite the Fed, forcing it to taper its bond purchases and allow the recovery to accelerate. First, the Jan. 2 tax bill removed the risk of tax rate increases—on income, dividends, estates and the alternative minimum tax—that depressed growth in 2010-12. Second, most businesses are encouraged by the sequester and the idea of the government tackling spending, however clumsily. Third, private credit has started to grow, helped by thousands of new nonbank lenders. Total credit grew at a 5.6% annual rate in the fourth quarter of 2012 after contracting for much of 2009-12.

But whether the economy turns up or not, it should be clear that the Fed’s unprecedented and far-reaching monetary policy has been a drag, not a stimulus.

The charts below compare the US and Eurozone . The first shows how the Fed has done a better job at getting the ‘recovery’ going. QE1 in March 2009 was ‘trend reversing’. In April (and June) 2011 the ECB thought it wise to increase rates! And Draghi´s July 2012 “ECB will do whatever it takes” has not been a ‘game changer’. 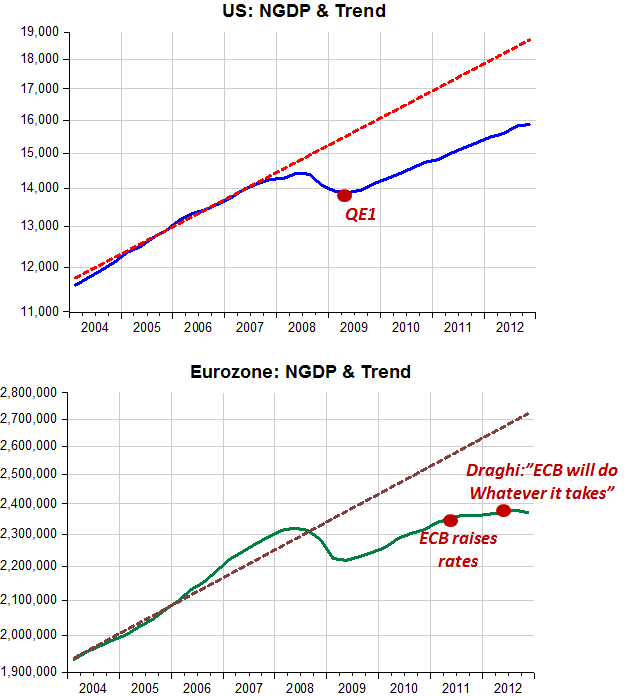 The next chart provides a clear indication that the ‘debt problem’ that has been a topic of hot discussion is really a monetary policy problem. So it´s not a question that fiscal ‘austerity’ is needed to reduce debt and raise output growth. It´s really a question about ‘improving’ monetary policy to get both growth up and debt down. 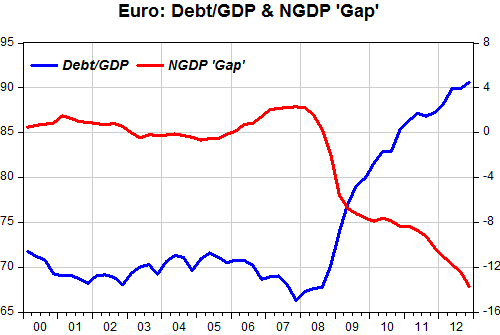