Ezra Klein has this piece on “Clinton and the housing boom“::

“This got me wondering what exactly happened around 1995 to cause that jump,” Dylan wrote to me. “Correlation isn’t causation, but I dug up this document, the National Homeownership Strategy, which HUD Secretary Henry Cisneros and Bill Clinton announced in 1995. The strategy involved lowering standards for homeownership: reducing years of income first-time buyers needed to demonstrate, letting them tap retirement savings, letting mortgage sellers to use their own appraisers, etc. Here are a couple of articles interrogating its role in the subprime crisis. So here’s the graph again, with the National Homeownership Strategy added.” 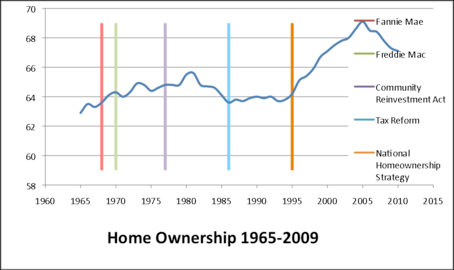 Interesting because I thought this was ‘common knowledge’. I myself had written on it almost five years ago and it´s included in the first part of Chapter 6 in my book with Benjamin Cole.

The best summary was given by Russell Roberts of GMU in an October 2008 WSJ op-ed aptly entitled: “How Government Stoked the Mania”.

The Community Reinvestment Act (CRA) did the same thing with traditional banks. It encouraged banks to serve two masters — their bottom line and the so-called common good. First passed in 1977, the CRA was “strengthened” in 1995, causing an increase of 80% in the number of bank loans going to low- and moderate-income families.

It was certainly not due to Greenspan´s notoriously famous “rates too low for too long” seven years later! Not to leave any doubts, my view is that monetary policy in 2001-03 was ‘too tight‘.

4 thoughts on “Digging for causes”