With unemployment well above normal levels and inflation subdued, fostering our congressionally mandated objectives of maximum employment and price stability requires a highly accommodative monetary policy. Normally, the Committee would provide policy accommodation by reducing its target for the federal funds rate, thus putting downward pressure on interest rates generally. However, the federal funds rate and other short-term money market rates have been close to zero since late 2008, so the Committee has had to use other policy tools….

In the current economic environment, monetary policy is providing significant benefits. Low real interest rates have helped support spending on durable goods, such as automobiles, and also contributed significantly to the recovery in housing sales, construction, and prices. Higher prices of houses and other assets, in turn, have increased household wealth and consumer confidence, spurring consumer spending and contributing to gains in production and employment. Importantly, accommodative monetary policy has also helped to offset incipient deflationary pressures and kept inflation from falling even further below the Committee’s 2 percent longer-run objective.

To him it seems to be true. But surely, if monetary policy had really been highly accommodative for 4 ½ years the situation would surely be very different now. At least you wouldn´t be worried about inflation “falling even further below the target”!

And if you judge the stance of monetary policy by what is happening to nominal spending (NGDP), monetary policy was never before so tightfisted in a recovery (and note that this recession was characterized by the most prolonged fall in spending since the 1930s!), being the best explanation for the highly parsimonious ‘recovery’ in employment. The chart illustrates. 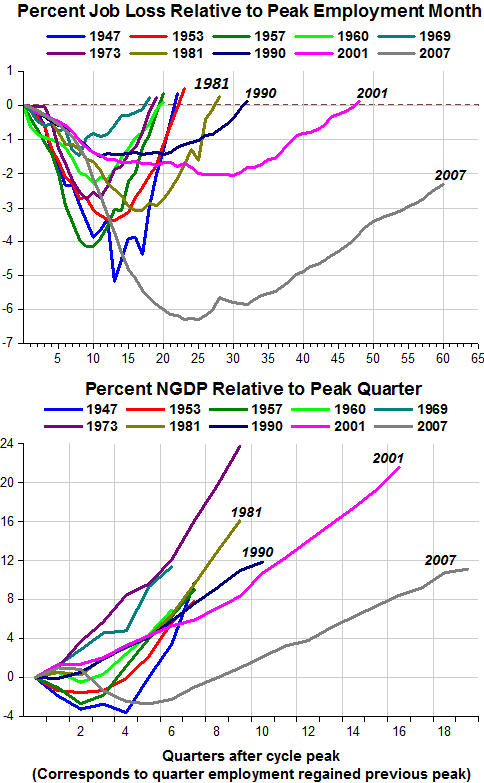