Last summer this is what Christine Lagarde said:

“We are here to celebrate your achievements,” Christine Lagarde, the chief of the International Monetary Fund, told a conference in Riga, the capital, this past summer. The fund, which along with the European Union financed a bailout of 7.5 billion euros for the country at the end of 2008, is “proud to have been part of Latvia’s success story,” she said.

Alf Vanags, director of the Baltic International Center for Economic Policy Studies here, is skeptical. “The idea of a Latvian ‘success story’ is ridiculous,” he said. “Latvia is not a model for anybody.”

A better and more equitable way out of Latvia’s troubles, he believes, would have been a devaluation of the currency, an option closed to Greece and 16 other countries that use the euro. Latvia kept its currency pegged to the euro, putting itself in much the same straitjacket as euro zone nations.

But Latvia’s high pain threshold and unusually open economy set it apart, enabling a relentless squeezing of wages, said Morten Hansen, head of the economics department at the Stockholm School of Economics in Riga.

“You can only do this in a country that is willing to take serious pain for some time and has a dramatic flexibility in the labor market,” he said. “The lesson of what Latvia has done is that there is no lesson.”

One of my favorite models is the Meade-Swann Internal External Balance model which can be illustrated with a simple graph.

The figure is divided in four quadrants. Quadrant I depicts a situation where the country is running a current account deficit (D) and unemployment is above the “natural” rate (U). Quadrant III represents a situation of CA surplus (S) and “overheated” economy (O), one in which unemployment is below the “natural” rate, and so forth for the other quadrants.

Latvia´s initial position (point 1) was in Quadrant IV. The economy was ‘overheated’ (unemployment ‘too low’, growth and inflation ‘too high’) and registered a large current account deficit. Spain, on the other hand was not ‘overheating’ but also had a significant CA deficit, so I place it on the boundary of Quadrants I-IV. 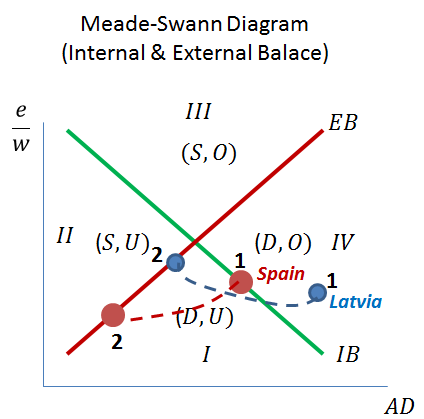 Both economies traverse from point 1 to point 2. Since labor markets are much more flexible in Latvia, it regained CA balance more quickly (internal devaluation from cuts in wages) and growth could resume. Higher growth in Latvia has certainly helped ‘austerity’ (measured by the Public Sector Balance relative to GDP).

The dynamics of real growth, unemployment, current account, inflation and public sector balance are charted below. 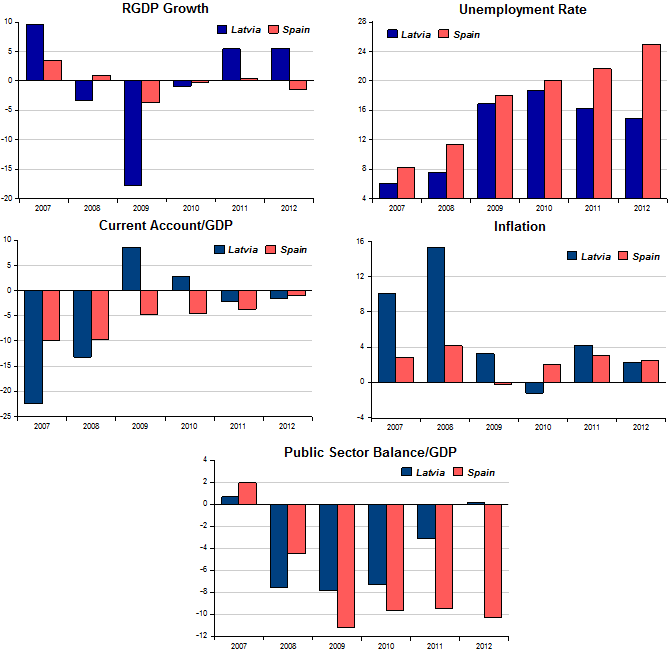 But zombie ideas do not die, especially in the euro zone. Nothing will convince the ECB that Latvia isn’t a success story — unless it’s more convenient to claim Estonia is instead. Regardless of the fact, the ECB will keep pushing southern Europe into perma-slump as the path to prosperity.
Now that’s scary.

2 thoughts on “Latvia & Spain: Any role for austerity?”