It´s all the fault of Thomas Herndon, the Amherst graduate student that had the gall to fault R&R´s ‘beautiful masterpiece’. According to the OECD Chief-Economist, the Italian Carlo Padoan:

The euro zone is at risk of snatching defeat from the jaws of victory by abandoning efforts to cut budget deficits and fix long-standing economic problems, the Organization for Economic Cooperation and Development‘s chief economist warned Monday.

In an interview with the Wall Street Journal, Carlo Pier Padoan said euro-zone governments are close to stabilizing and even cutting their debts relative to economic output.

But he warned that governments facing resistance from voters as unemployment rates rise may halt their fiscal consolidations before they achieve that “remarkable result.”

“There is a risk that reform fatigue increases significantly, with governments facing very strong social resistance, and that happens at the wrong moment, because we are almost there,” Mr. Padoan said. “Our message is, we have done a lot in Europe, let’s not waste it.”

Mr. Padoan’s comments come as a growing number of European leaders are easing the austerity programs that have dominated policy across the continent in recent years, focusing instead on measures to promote growth.

That shift in policy was crystallized last week when European Commission President Jose Manuel Barroso said the policy of austerity no longer has the public backing needed to work.

Interestingly, in this case the tables are turned and it´s not that austerity doesn´t work but that it was abandoned too soon!

Which brings me once again to the picture of Merkel leading the ‘zombies’: 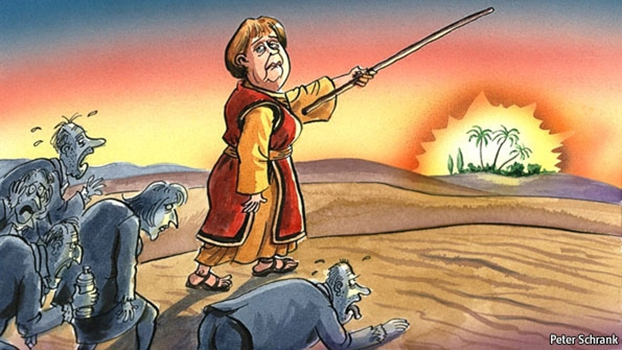 And to the lyrics of “We´re almost there”:

Note: Between 200 and 2005 Mr. Padoan was at the IMF and responsible , among other small countries, for overseeing  Greece and Portugal!

One thought on “They must hate “The Student””