Long-term unemployment is a terrifying trap. Once you’ve been out of work for six months, there’s little you can do to find work. Employers put you at the back of the jobs line, regardless of how strong the rest of your resume is. After all, they usually don’t even look at it.

Let’s be clear. Ghayad’s field study shows employers discriminate against the long-term unemployed. All of the fake resumes he sent out were basically identical. But firms ignored the ones from people who’d been out of work for six months or longer — even when they had better credentials. Employers look at how long you’ve been unemployed as a better proxy for skills than anything else on your resume. In other words, more jobs-training probably won’t help the long-term unemployed all that much. Even a stronger economy will only help them years in the future, rather than many years in the future.

Is that something novel, or has it happened before? My approach was to set up the following chart. 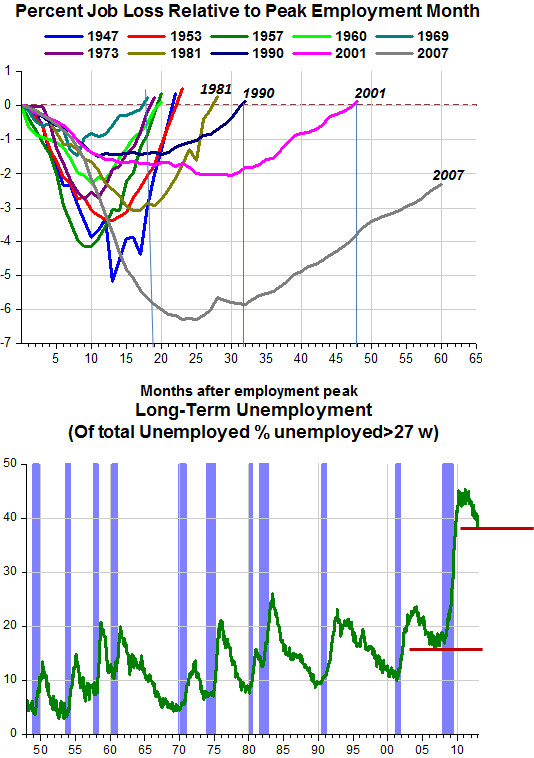 In the bottom panel we see that before the 1981 (“let´s get rid of inflation”) recession, long run unemployment would rise to a ‘limit’ of 20% and would fall significantly below 10% during the expansion phase of the cycle.

In the 1981 and 1990 recessions this pattern changes somewhat. Long-term unemployment goes a bit over 20% but is ‘capped’ at 10% during the expansion.

The 2001 recession introduces a further ‘innovation’ in that long-term unemployment falls only to 15% in the expansion.

In the present cycle the pattern is completely broken. Long-term unemployment soars to 45% and almost four years into the expansion phase still stands at almost 40% (39.6%)!

Maybe if Ghayad’s field study had been done in 2004 the conclusion would be qualitatively similar. It only got much worse!

The top part of the panel shows that the time taken for employment to recover to the previous peak increased relative to the average time obtained in the previous cycles. In the 2001 cycle the time span jumped to 48 months (from 32 months in the 1990 cycle), consistent(?) with long-term unemployment falling much less than previously.

From the employer´s perspective, the time one has been out of work may be an important ‘signaling’ device. “If you have been long unemployed is because no one wants you, so why should I”? Terribly callous for sure, but ‘that´s life’.

And what makes things even worse is that there may not be a ‘solution’ to this problem. The present long-term unemployed are ‘unemployable’, end of story.

The ‘solution’ is to stop generating additional long-term unemployed. How?

The chart below gives a hint. The top panel, again, shows the time for employment to recover the previous peak which I argued may be an important factor in determining the level of long-term unemployment (and, therefore, the hardship experienced by those unfortunate workers). The bottom panel shows that the time span for employment recovery is closely associated with the speed at which NGDP grows after the downturn.

Take, for example, the 2001 recession. It was short and shallow. Nevertheless, the Fed let NGDP fall significantly below the trend level path it had been following. Only after mid-2003, once the Fed adopted ‘forward guidance’, did it began to rise back to trend. On the other hand, in 1973, following the oil (supply) shock, the Fed quickly ‘cranked up’ NGDP growth. Since employment recovered quickly, long-term unemployment did not increase ‘excessively’ and dropped fast. The ‘cost’ in this case was an increase in inflation, but we were already living in an inflationary environment.

So it seems that the path of NGDP is an important factor behind long-term unemployment (and the resulting number of unemployable workers). In 1973 Arthur Burns did not believe inflation was the result of expansionary monetary policy, so he geared MP to employment. In 2008, Bernanke was very much afraid of inflation taking-off. Acting on this perception the Fed tightened monetary policy to a degree not seen since 1938.

To avoid future human tragedies the Fed should concentrate efforts in stabilizing NGDP along a reasonable trend level path. If it does so it will limit the future length of unemployment and the number of ‘unemployable’ while maintaining overall macroeconomic stability.