I found the title of this essay by Bloomberg editors: “Toward a New Consensus on Monetary Policy” promising. But then I got dizzy with the number of times the “I” word is mentioned: a total of 46 times! And it even gets to be a heading title: “Inflation Remedy”:

If the Fed announced its intention to close that gap as quickly as it could, it would be telling the financial markets to expect both a huge monetary stimulus and a rise in inflation well in excess of the Fed’s “price stability” benchmark of 2 percent. The jump in inflation would cut real short-term interest rates and stimulate demand. It wouldn’t be an unwanted side-effect. It would be part of the remedy.

It would seem natural, if what you want is to form a new consensus on monetary policy that you start out by redefining its “target”. Abolish the word inflation and substitute it for NGDP (or nominal spending). Even then, it wouldn´t be easy, given how ingrained the “I” word is in the minds of even those that should know better. For example:

The idea remains controversial — and in fact it’s an old controversy. As Charles Goodhart, one of the U.K.’s leading monetary economists, recently wrote, “Adopting a nominal income (NGDP) target is viewed as innovative only by those unfamiliar with the debate on the design of monetary policy of the past few decades.” He continued: “A NGDP target would be perceived as a thinly disguised way of aiming for higher inflation. As such, it would unloose the anchor to inflation expectations, which could raise, not lower, interest rates by elevating uncertainty about the central bank’s reaction function.”

Another ‘well-meaning’ paper just released by the Fed of New York – Lift inflation expectations to boost growth – is also hooked on the “I” word:

In times like these, a rise in inflation expectations could do the economy some good, argues research published by the Federal Reserve Bank of New York.

The paper argues that when traditional forms of monetary policy, such as cutting short-term interest rates, can go no further, central bankers can goose economic activity higher if they can convince the public the future pace of inflation is likely to rise.

Contrary to Goodhart’s´ view that it´s a “thinly disguised way of aiming for higher inflation”, it is very explicitly focused on getting the real economy going.

Apparently, the Volcker Fed thought so too. At the end of 1982 the following exchange took place at the FOMC meeting:

Frank Morris (Boston Fed president): “I think we need a proxy – an independent intermediate target – for NGDP, or the closest thing we can come to as a proxy for NGDP, because that´s what the name of the game is supposed to be.”

The chart shows what happened thereafter. Initially NGDP growth shot up to over 12%, positioning spending at a new level before being ‘eased down’ to the 5% plus that characterized the growth path of NGDP during the “Great Moderation”. Inflation continued to trend down and unemployment dropped from lofty heights. 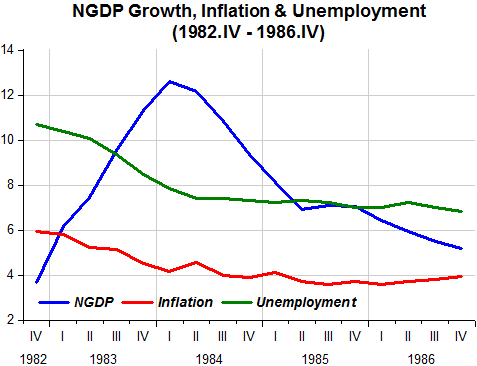 The next chart shows what happened when the FOMC adopted ‘forward guidance’ in mid-2003 after observing that ‘extremely low’ interest rates were not doing the job of igniting the economy. NGDP growth jumped to bring the level of spending to the original path. Unemployment came down and inflation went back closer to “target”. Please note that during 2003-05 there was an oil and commodity price shock! Having brought back spending to the level target path, NGDP growth eased back to the 5% plus rate. 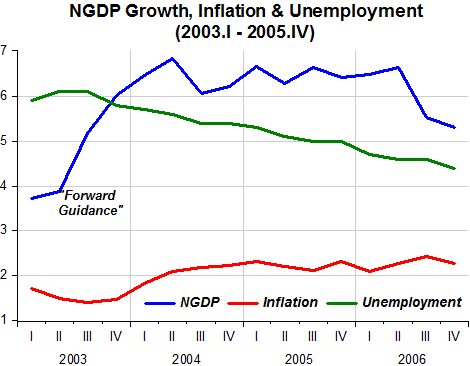 Unfortunately Bernanke, ‘hooked-up’ on the “I” word, was instrumental in bringing about the “Great Recession”. And keeping the “I” word alive will not help in changing the economic landscape.

Market monetarists, with their single-minded focus on the level of aggregate nominal spending provide a much more effective solution.

5 thoughts on “Don´t wrap your product in ‘inflation paper’”