It is said that NGDI is a more accurate measure than NGDP. Maybe the income data is easier to record?

Anyway, they make up the two sides of the national income accounts. The product (NGDP) side measures production and sales. The income (NGDI) side measures the distribution of the proceeds from sales. In a “perfect world” they should be identical. But we live in an “imperfect world”, so there are discrepancies.

Despite the (short term) “discrepancies”, over time they should give out the same information, i.e. they shouldn´t persistently or systematically diverge. So let´s visually examine the two series over a long span of time. For no particular reason I chose to start the comparison in 1987 (start of the “Great Moderation”, a period in which the Fed managed to closely target the level path of NGDP). 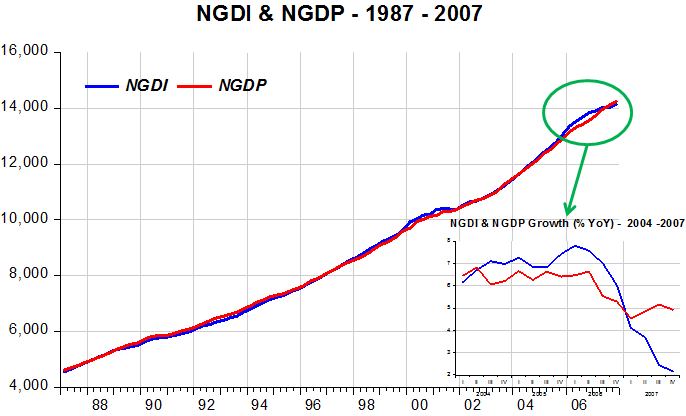 The chart shows that NGDI & NGDP were almost exactly the same at the end points. Nevertheless there are periods in which they diverge, as in 2004-06, for example. The small chart within shows that NGDI was above (growing more) than NGDP in 2004-06. To “adjust” NGDI growth fell well below NGDP growth in 2007. This was an instance of “catch-down”. (Note: more econometric work is needed to ascertain which of the two – NGDI or NGDP – does the “adjustment.” From “eyeballing” the charts and others that I´ve fiddled with, I would guess, and it´s only a guess, that NGDI does the “adjustment”, i.e. grows more or less than NGDP to “bring them together”).

The next chart shows NGDI & NGDP since the start of the Great Recession. Note that at the start NGDI fell more than NGDP, which was followed by a period of higher NGDI growth to “catch-up”. Lately, NGDP has been above (grown more) than NGDI. Scott has said that preliminary numbers from the BEA indicate that NGDI has grown close to 4% in Q4 2012. This would be consistent with the conjecture that NGDI does the “adjustment”. But it doesn´t imply, as Scott writes, that “NGDP (probably) up around 4% in 2012 Q4”. 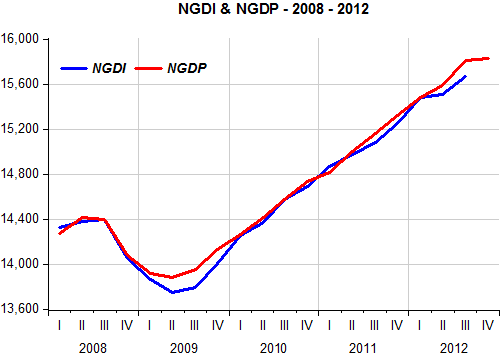