WASHINGTON — With a nervous eye on the “fiscal cliff,” the Federal Reserve is expected this week to announce a new bond-buying plan to support the U.S. economy.

The goal would be to further reduce long-term interest rates and encourage borrowing by companies and individuals. If it succeeds, the Fed might at least soften the blow from tax increases and spending cuts that will kick in in January if Congress can’t reach a budget deal.

But the Fed’s actions wouldn’t rescue the economy. Chairman Ben Bernanke warned last month that if the economy fell off a “broad fiscal cliff,” the Fed probably couldn’t offset the shock.

But look at the chart 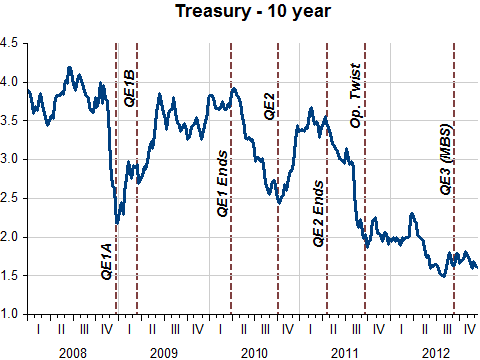 In all bond-buying programs – QE1A, QE1B, QE2 – which involved Treasuries, 10 year rates went up. As soon as the program ended they came down. Operation Twist – a maturity swap – was just enough to stop long rates falling further. QE3 was an MBS buying program.

So, if tomorrow, at the close of the FOMC meeting the Fed announces that it will replace Operation Twist by an equivalent amount of outright purchase of Treasuries I´m willing to bet long rates will not come down. Why don´t I bet they will go up? Maybe because the Fed has ‘cried wolf‘ once too many times.

Note that Bernanke has already put up his defense. He could offset the so-called ‘Fiscal Cliff’ if he wanted to. But that risks seeing inflation go above the 2% firewall!