Scott Sumner questions the validity of the majority on fiscal stimulus:

And he links to:

Another Berkeley star goes down the same route:

Without knowing where the economy was headed in the absence of the stimulus, it’s impossible to judge what it contributed just from what happened afterward. That’s why empirical economists rely on other approaches.

One is to look at history. The stimulus legislation, technically known as the American Recovery and Reinvestment Act of 2009, was a mixture of tax cuts for families and businesses; increased transfer payments, like unemployment insurance; and increased direct government spending, like infrastructure investment. A growing literature examines the effects of such tax cuts and increases in government spending over history and across countries, and the overwhelming conclusion is that fiscal stimulus raises employment and output in the near term.

It is interesting to note that Christy Romer has at other times endorsed NGDP Targeting:

Mr. Bernanke needs to steal a page from the Volcker playbook. To forcefully tackle the unemployment problem, he needs to set a new policy framework — in this case, to begin targeting the path of nominal gross domestic product.

Nominal G.D.P. is just a technical term for the dollar value of everything we produce. It is total output (real G.D.P.) times the current prices we pay. Adopting this target would mean that the Fed is making a commitment to keep nominal G.D.P. on a sensible path.

The charts below indicate she´s right on that count. So let us forget about ‘fiscal stimulus’, which more hinders than helps, and keep to the premier stabilization tool, Monetary Policy, preferably gearing it to target a level growth path for nominal spending. 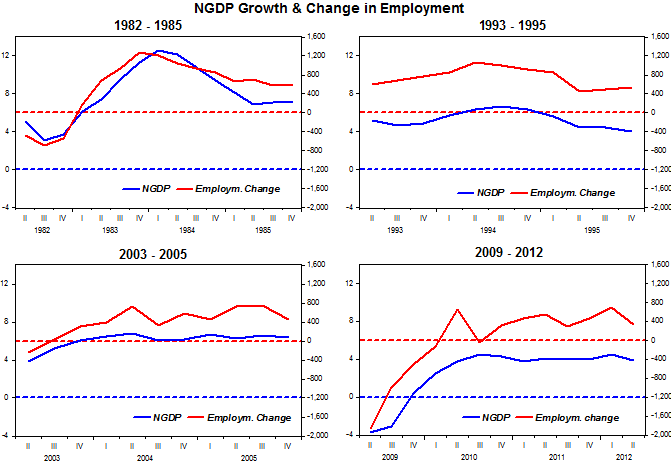 One thought on “The Berkeley View: Fiscal Stimulus Rules”