In “All hail Ben Bernanke”, Scott Sumner links to Jon Hilsenrath´s take on Bernanke convincing recalcitrant FOMC members to gather behind him.

At the end, Scott wonders if the Larry Ball working paper released in February of this year had anything to do with Bernanke´s change in attitude. Notable is that Bernanke had some “sessions” with Carl Robinson, a psychologist whose work is described thus:

While his work varies with each organization, Mr. Robinson said three decades in the business have underscored a few basic principles.

“We spend a lot of time trying to help people understand organizations don’t function like individuals,” he said. Workplace politics and an employee’s reputation, for example, can play a part in company dynamics.

And Mr. Robinson emphasized the importance of getting the right people in charge.

“Leaders cast long shadows,” he said. “You cannot overestimate the impact of a leader.”

In his paper, Larry Ball documents Bernanke´s “change of views” regarding the conduct of monetary policy at low interest rates after Vincent Rinehart´s presentation at the June 2003 FOMC meeting.

In his briefing Reinhart discussed three main policy tools at the zero bound. In the written material accompanying his talk, he summarizes these tools as

Notice that these policies are close to those the Fed has actually followed since 2009. The first point foreshadows the Fed’s “communications strategy” about the federal funds rate; the second is Operation Twist (Reinhart is referring to the relative supplies of short- and long-term Treasuries); and the third is quantitative easing.

In his briefing, Reinhart describes channels through which each of the three policies might work, but he also raises questions about their effectiveness. He concludes that “considerable uncertainty surrounds the timing and magnitude of the effects of any of these policies on the economy.”

In the course of analyzing the option of “shifting relative supplies,” Reinhart brings up one of Bernanke’s early proposals: ceilings on long-term interest rates. He expresses skepticism that this “extreme” policy would work, saying in part:

[P]urchases of securities might have to be massive to enforce a ceiling if investors came to doubt that rates would be kept low. At that point, you might have the concern that the security would become disconnected from the yield curve and from private rates.

Reinhart’s discussion of his three main options covers four pages in the FOMC transcript. It is followed by half a page in which Reinhart notes, “There are other alternatives if the policymakers believed that deflationary forces were severe.” He presents a list of policies that include two that Bernanke previously advocated: currency depreciation and money-financed tax cuts. The list also includes increased discount-window lending, purchases of corporate debt and equity, and reductions in reserve requirements. Lumping all these options together, Reinhart dismisses them:

You can see why I put this list last. These options would change how we are viewed in financial markets, involve credit judgments of a form we are not used to, perhaps smack of desperation, and pull us into a tighter relationship with other parts of government.

And look at what happens next.

Up to the June 2003 FOMC meeting, the language was “standard”:

June 2003: The Committee continues to believe that an accommodative stance of monetary policy, coupled with still robust underlying growth in productivity, is providing important ongoing support to economic activity. Recent signs point to a firming in spending, markedly improved financial conditions, and labor and product markets that are stabilizing. The economy, nonetheless, has yet to exhibit sustainable growth. With inflationary expectations subdued, the Committee judged that a slightly more expansive monetary policy would add further support for an economy which it expects to improve over time. FF: From 1.25% to 1%

And the language changes on cue in the following FOMC meeting:

Aug 2003: The Committee perceives that the upside and downside risks to the attainment of sustainable growth for the next few quarters are roughly equal. In contrast, the probability, though minor, of an unwelcome fall in inflation exceeds that of a rise in inflation from its already low level. The Committee judges that, on balance, the risk of inflation becoming undesirably low is likely to be the predominant concern for the foreseeable future. In these circumstances, the Committee believes that policy accommodation can be maintained for a considerable period. FF=1%

Jan 2004: The Committee perceives that the upside and downside risks to the attainment of sustainable growth for the next few quarters are roughly equal. The probability of an unwelcome fall in inflation has diminished in recent months and now appears almost equal to that of a rise in inflation. With inflation quite low and resource use slack, the Committee believes that it can be patient in removing its policy accommodation. FF=1%

May 2004: The Committee perceives the upside and downside risks to the attainment of sustainable growth for the next few quarters are roughly equal. Similarly, the risks to the goal of price stability have moved into balance. At this juncture, with inflation low and resource use slack, the Committee believes that policy accommodation can be removed at a pace that is likely to be measured. FF=1%

June 2004: The Committee perceives the upside and downside risks to the attainment of both sustainable growth and price stability for the next few quarters are roughly equal. With underlying inflation still expected to be relatively low, the Committee believes that policy accommodation can be removed at a pace that is likely to be measured. Nonetheless, the Committee will respond to changes in economic prospects as needed to fulfill its obligation to maintain price stability. FF: From 1% to 1.25%.

How did all this work?

The economic instability began in 1998. For the previous eight years nominal spending had evolved very close to the “Great Moderation” trend level. During 1998-2000 spending shot up above trend, likely due to the Fed mistakenly responding to other shocks (productivity, LTCM, among others).

Beginning in mid-00, it started to constrain spending. It did, but overshot the trend on the downside. Beginning in mid-2003, coinciding with the change in language following the June FOMC meeting, nominal spending growth began to rise and the level of spending began to “travel” towards trend. The chart below illustrates superimposing NGDP growth. 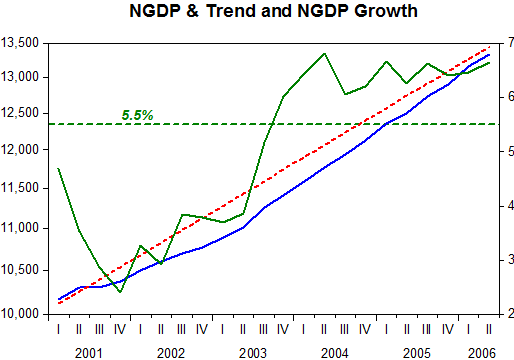 Inflation, much like today, was below “target” and increased somewhat above with the rise in nominal spending growth above 5.5% which, after all, is what´s needed for spending to “catch-up” to trend. That just about happened by the time Greenspan passed the baton to Bernanke in early 2006. 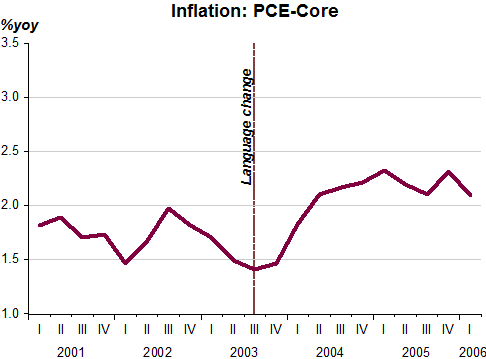 And unemployment turned down. 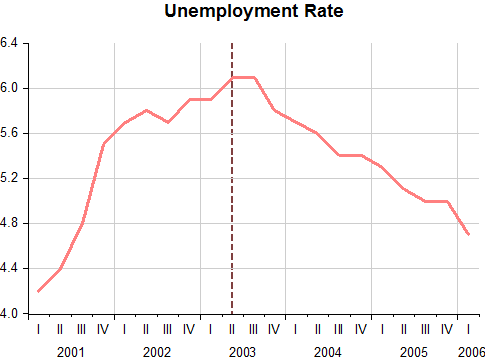 Market Monetarists look at market signals to gauge if a policy is working. At every QE announcement, for example, stocks, long rates and inflation expectations have all initially increased. The inefficacy of the programs comes from the absence of a specified target, preferably, to MM´s, an NGDP Level target.

Back in 2003, the language change was powerful and proved to be enough to propel spending back to target. The market indicators all responded as expected as shown in the charts below. (Stocks, as usual, a more “trigger happy”). 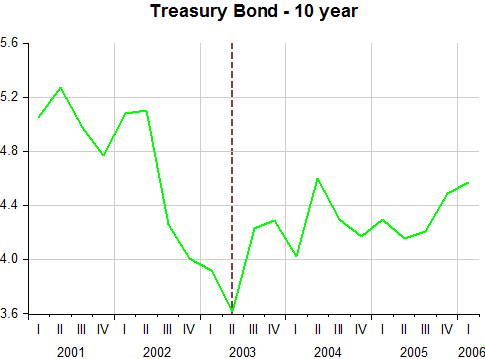 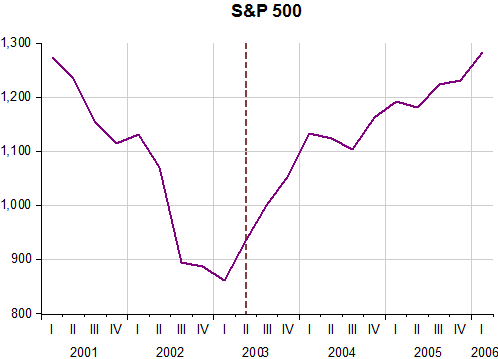 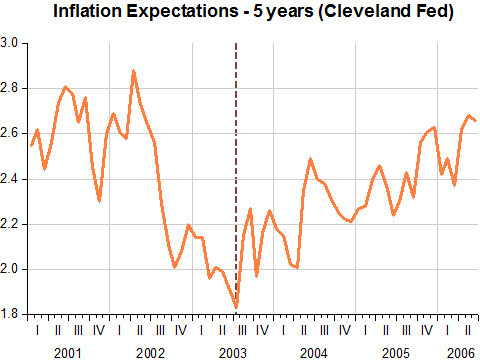 I believe this is convincing evidence that, contrary to what many think, monetary policy wasn´t “exceedingly easy” in 2003-05.  Soon, as we now know, it would become “exceedingly tight”.

In December 2008, the United States hit the zero bound. The Fed’s main policy responses have been close to the three suggestions in Reinhart’s 2003 briefing and the Bernanke-Reinhart papers from 2004:

A)      The Fed has sought to lower long-term interest rates through announcements about short rates.

B)      Starting in 2009, the FOMC said after each meeting that it expected “exceptionally low levels” for the federal funds rate “for an extended period.” In August 2011, the “extended period” was defined more precisely as “at least until mid-2013”; in January 2012, it became “at least through late 2014.”

C)      Starting in September 2011, the Fed has changed the relative supplies of assets through Operation Twist, in which it bought long-term Treasuries and sold short-term Treasuries.

D)     The Fed has oversupplied bank reserves through two rounds of quantitative easing, QE1 in Spring 2009 and QE2 in Fall 2010. (These actions also changed the relative supplies of securities, because the bonds purchased during the QE’s were long-term.)

In sum, since 2009 the Fed has implemented the contingency plans for the zero bound that the Greenspan Fed developed in 2003.

Unfortunately, this time they didn´t work as previously. So it´s possible that what´s required is the old Bernanke with some twists like, for example, stipulating a level target for Nominal Spending (NGDP).