The WSJ asks if inflation could revive the economy. Chinn & Frieden answer in the affirmative, ‘selling’ it as: “something completely different – an approach to restoring vigorous economic growth that challenges the received wisdom of our era”.

The illustrative chart follows and indicates that the current rate of joblessness is equivalent to inflation running at 4.2%. 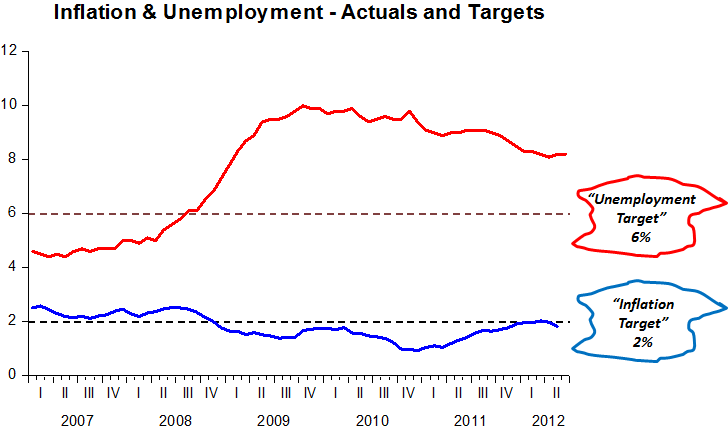 The proposed solution is supposed to follow from the diagnosis, it being that, according to Chinn & Frieden:

The big factor holding back economic growth in both the U.S. and Europe, the two economists say, is debt: Consumers, companies and governments are all struggling under the burden of huge debts run up during the boom years, making it harder for them to spend, borrow and invest.

Washington, Brussels and London have offered a fairly conventional – and often contradictory – mix of macro-stimulus to increase demand, austerity measures to reassure creditors and debt restructuring when all else fails.

But they are loath to use a tried-and-true tool to manage crippling systemic debt: inflation. That’s no misprint: inflation.

Lately, the “need for deleveraging” has been elected the major culprit in keeping economic recovery under wraps. Higher inflation is seen as a way to “grease the wheels” of adjustment, to many the only, and much better, alternative to “austerity”.

But what do the people who decide – the Fed – think of the proposal? As Bernanke said at a news conference in April:

We, the Federal Reserve, have spent 30 years building up credibility for low and stable inflation, which has proved extremely valuable in that we’ve been able to take strong accommodative actions in the last four or five years to support the economy without leading to an unanchoring of inflation expectations or a destabilization of inflation. To risk that asset for what I think would be quite tentative and perhaps doubtful gains on the real side would be, I think, an unwise thing to do.

And just last week during his Congressional Testimony, in response to a question from North Carolina Republican Patrick McHenry, Bernanke essentially repeated his spiel from the April News Conference:

If the Fed raised its inflation target from 2% to 4%, businesses and households might reasonably wonder whether they could raise it again in the future. Such a loss of confidence in the Fed’s discipline could make it harder for the Fed to control inflation in the future.

Earlier this year the Fed made the 2% inflation target official. Since that has been Bernanke´s “dream” for at least 15 years, I wonder why so many analysts insist in proposing temporarily higher inflation targets. That´s just not going to happen!

If only Bernanke recognized that his obsession with inflation was a major factor behind the steep fall in nominal spending after mid-08, he might concede the point. But he doesn´t, even when it comes out pretty clearly in the FOMC Statements of June, August and September 2008.

June/08 – Readings on core inflation have improved modestly in recent months. However, a sustained moderation in inflation pressures has yet to be convincingly demonstrated. Moreover, the high level of resource utilization has the potential to sustain those pressures.

In these circumstances, the Committee’s predominant policy concern remains the risk that inflation will fail to moderate as expected. Future policy adjustments will depend on the evolution of the outlook for both inflation and economic growth, as implied by incoming information.

August/08 – Although the downside risks to growth have increased somewhat, the Committee’s predominant policy concern remains the risk that inflation will fail to moderate as expected. Future policy adjustments will depend on the outlook for both inflation and economic growth, as implied by incoming information.

September 18/08 – Readings on core inflation have improved modestly this year.  However, the Committee judges that some inflation risks remain, and it will continue to monitor inflation developments carefully.

All over the world, not only in the US, the “inflation targeting obsession” has been the main contributor to an ‘absence of economic recovery’ – notable exceptions being Australia, Sweden and Poland. Interestingly those three countries are faring much better than the others.

PS.  There’s another journalist endorsing NGDP targeting, someone with the initials L.S. at Free Exchange:

There is a point here. Why elect politicians to govern the country when the key levers of economic control lie elsewhere? It was the same question asked on Greek squares last month. Liberal Democrats keen to oust Lords from Britain’s Parliament must ponder if it’s worth the bother, when a King down the river holds more power than the lot of them.  .  .  .

At present there is a pretence that the Bank of England’s only target is inflation. Everyone knows this is false: the Bank is pursuing a loose monetary policy to help growth. The Bank should be explicit about this. Rather than keep apologising to the Chancellor for overshooting, the Governor should have a mandate to target GDP too. Nominal GDP targeting would be better than the current charade. The credibility of the Bank and the government would be best served by an official change.

I like the term ‘charade.’  It’s becoming increasingly clear that inflation targeting was a mistake, and that Bennett McCallum was right all along.  NGDP targeting is the logical policy, as it best reflects the actual goal of policymakers around the world.  Let’s end this charade.

And to those that waste so much ink on trying to entice higher inflation targets in order to help solve the ‘deleveraging problem’, several months ago Nick Rowe thought that was worth only a couple of lines, as an afterthought:

Oh, and if you believe in the debt-deleveraging hypothesis, there’s an additional channel. Higher expected future NGDP makes it easier to handle a given debt load, by reducing future expected debt/income ratios.