But Steve Williamson puts up a chart that confuses because it is wrong. This is his chart: 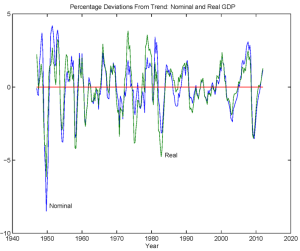 So, what do we make of this? If achieving a NGDP target is a good thing, then variability about trend in NGDP must be bad. So how have we been doing? The first chart shows HP-filtered nominal and real GDP for the US. You’re looking at percentage deviations from trend in the two time series. The variability of NGDP about trend has been substantial in the post-1947 period – basically on the order of variability about trend in real GDP. You’ll note that the two HP-filtered time series in the chart follow each other closely. If we were to judge past monetary policy performance by variability in NGDP, that performance would appear to be poor.

There’s another interesting feature of the first chart. Note that, during the 1970s, variability in NGDP about trend was considerably smaller than for real GDP. But after the 1981-82 recession and before the 2008-09 recession, detrended NGDP hugs detrended real GDP closely. But the first period is typically judged to be a period of bad monetary policy and the latter a period of good monetary policy.

Scott Sumner thought that made no sense:

That makes no sense to me.  During the 1980s and 1990s the Fed moved toward a rule (call it the Taylor Rule, inflation targeting, whatever) that made their previous high inflation policy of the 1970s look stupid.  In fact if you speak to Fed officials they love to tell you how misguided Fed policy was during the Great Inflation, and how they’ve done a much better job since about 1983.

And Scott´s right. What Williamson forgets is that the “NGDP generating process” is very different before and after the “Volcker Transition” (VT) (and in any case shouldn´t be bundled together with RGDP, which follows a totally different process). During the 1960s and 1970s NGDP growth was nonstationary, i.e. had a trend. That´s not true after the “VT”. In fact NGDP growth volatility during the “Great Moderation” was 50% lower than during the “Great Inflation” and this reduction exactly matches the reduction in RGDP growth volatility between the two periods.

The charts below provide (I believe) a much better visual of things and how different was the behavior of NGDP after the “VT”. So, yes the latter period reflects good monetary policy while the first period doesn´t.

In the last chart above I left out “Bernanke´s Depression”, during which NGDP volatility shot up.

9 thoughts on “A picture should help, not confuse”