“Captain” Krugman auto proclaims himself a “dangerous voice” and wonders if he will be barred from entering the UK!

Aha. I’m a “dangerous voice” for criticizing UK austerity policies, not to mention one of “those who”. Other dangerous voices include Martin Wolf, who is getting shriller than I’ve ever heard him (and rightly so), Jonathan Portes (who has been doing yeoman work), and Simon Wren-Lewis, who is getting remarkably cynical.

So will I be allowed to enter the UK later this month to keep saying dangerous things?

He thinks he and his “gang” have been proven right over and over:

Of course, the reason us dangerous voices are so dangerous is that we’re right and are being proved right with each passing month’s experience. And it’s correspondingly becoming clear that Britain’s unnecessary turn to premature austerity is becoming a historic policy and political disaster that will haunt the country for years.

On the other side we get the “pursuers of truth” spearheaded by Scott Sumner who writes:

Glad to see Cameron/Obama/”European leaders”/Hollande/Barroso  have finally seen the light.  Now do it.

I parsed this “debate” a little while back. A reprise is in order. The first panel shows that the countries that avoided letting nominal spending (NGDP) drop significantly or at all are the ones where real output (RGDP) was least affected.

The panel below indicates that the same countries that did better monetary “stimulus” i.e. did not let NGDP tank are also the ones that have the lowest budget deficits. The high budget deficit group has low NGDP growth and weak RGDP recovery. 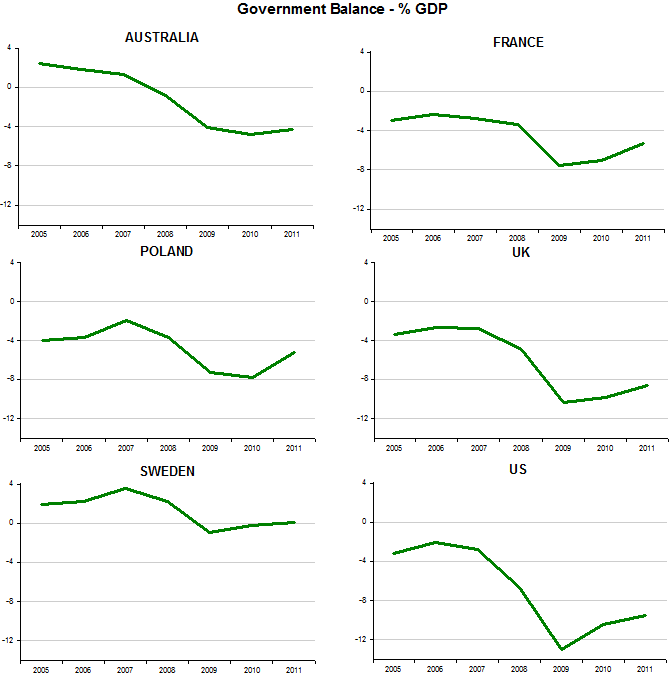 So maybe Krugman is not a “dangerous voice” but simply, and contrary to what he perceives, a “wrong voice”!