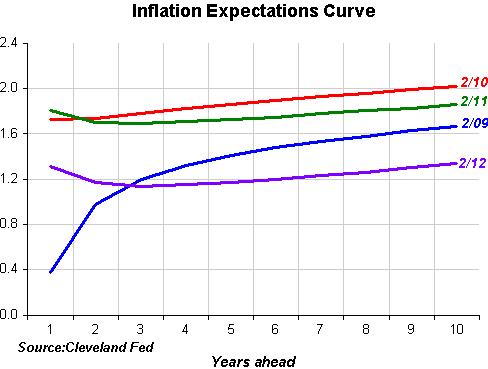 Maybe they are “backward-looking” and see year-on-year inflation going up over the past 12 months as shown in the “Inflation Gauges” chart below. Recently David Altig had a post with a “scary thought”. The moment the Fed “loses” it, in the sense that it allows (actually fosters) the spending dive that took place after mid 2008, is signaled. I also note that given the recent rise in energy/commodity prices, which pulled headline inflation, Atlanta Fed president Lacker is much more “sober” in his assessment. Although this is reminiscent of the guy who locks the stable doors after the horses have bolted, better late than never.

Note that in 2004-06 the Greenspan FOMC did not “overreact” to the oil & commodity shock of the period, so Bernanke had a bout of “stage fright” and/or was surrounded by a bunch of “trigger-happy” hawks!