The Atlantic argues in support of Santorum:

“We went into a recession in 2008. People forget why,” Rick Santorum told an audience recently. “They thought it was a housing bubble. The housing bubble was caused because of a dramatic spike in energy prices that caused the housing bubble to burst … People had to pay so much money to air condition and heat their homes or pay for gasoline that they couldn’t pay their mortgage.”

This sounds stupid to some writers. (Most of these writers were more likely to find Santorum stupid before he made that comment.) But it’s not very stupid, at all.

In 2009, economist James Hamilton published a paper that retroactively forecast what an oil shock, like the one we experienced in 2007-08, would do to GDP. And guess what? His model accurately predicated much of the collapse in GDP that resulted from the Great Recession — as if there had been no housing bubble or financial crisis! The oil spike was that bad.

So let´s check on Jim Hamilton:

Although the approaches are quite different, they all support a common conclusion: had there been no increase in oil prices between 2007:Q3 and 2008:Q2, the U.S. economy would not have been in a recession over the period 2007:Q4 through 2008:Q3.

One of the most interesting calculations for me was to look at the implications of my 2003 model. I used those historically estimated parameters to find the answer to the following conditional forecasting equation. Suppose you knew in 2007:Q3 what GDP had been doing up through that date and could know in advance what was about to happen to the price of oil. What path would you have then predicted the economy to follow for 2007:Q4 through 2008:Q4?

The answer is given in the diagram below. The green dotted line is the forecast if we ignored the information about oil prices, while the red dashed line is the forecast conditional on the huge run-up in oil prices that subsequently occurred. The black line is the actual observed path for real GDP. Somewhat astonishingly, that model would have predicted the course of GDP over 2008 pretty accurately and would attribute a substantial fraction of the significant drop in 2008:Q4 real GDP to the oil price increases. 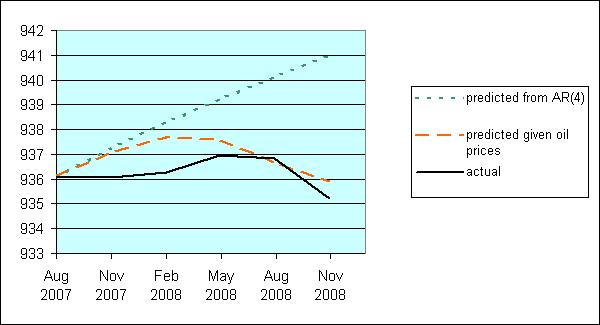 The implication that almost all of the downturn of 2008 could be attributed to the oil shock is a stronger conclusion than emerged from any of the other models surveyed in my Brookings paper, and is a conclusion that I don’t fully believe myself. Unquestionably there were other very important shocks hitting the economy in 2007-08, first among which would be the problems in the housing sector. But housing had already been subtracting 0.94% from the average annual GDP growth rate over 2006:Q4-2007:Q3, when the economy did not appear to be in a recession. And housing subtracted only 0.89% over 2007:Q4-2008:Q3, when we now say that the economy was in recession. Something in addition to housing began to drag the economy down over the later period, and all the calculations in the paper support the conclusion that oil prices were an important factor in turning that slowdown into a recession.

Let´s consider Jim´s arguments. There´s no doubt, just imagining a dynamic AS-AD model that a price shock increases inflation and reduces real output, so Jim´s conclusion is not special. But the strength of the oil price effect on real output is predicated on how the Fed reacts to the shock.

There´s an interesting experiment to be made. In 2003-2006 the economy was buffeted by an oil price shock that was even stronger (higher percent price increase) than the one that occurred in 2007-08. This is shown in the charts below.

As the next charts show, in the 2003-06 period NGDP growth was kept stable, so that RGDP growth was only little reduced. This was not the case in 2007-08. In the later period, the Fed remained so worried about inflation that it kept contracting NGDP and that´s the reason a “run of the mill recession” became “Great”!

5 thoughts on “By blaming oil & gas prices for the “Great Recession”, Rick Santorum takes the heat off the Fed”