Let me return for a minute to Kevin O’Rourke’s recent piece on the European summit. Aside from pointing out just how bad an idea the new super-stability pact is, O’Rourke makes an important observation about what the European experience teaches us about macroeconomics:

The world nowadays looks very much like the theoretical world that economists have traditionally used to examine the costs and benefits of monetary unions. The eurozone members’ loss of ability to devalue their exchange rates is a major cost. Governments’ efforts to promote wage cuts, or to engineer them by driving their countries into recession, cannot substitute for exchange-rate devaluation. Placing the entire burden of adjustment on deficit countries is a recipe for disaster.

And Krugman goes on to argue that:

Basically, European experience is very consistent with a Keynesian view of the world, and radically inconsistent with various anti-Keynesian notions of expansionary austerity and flexible prices.

The point about nominal wages is especially telling. Ireland has clearly — clearly — faced a massive demand shock; maybe Casey Mulligan will find some way to insist that 14.5 percent of the Irish work force has voluntarily decided to refuse employment, but it’s just not true. And Ireland is supposed to have flexible markets — remember, before the crisis it was hailed as an example of successful structural reform.

Early this year I wrote a post in which I had this graph, confirming Ireland´s greater market flexibility (“shock absorbers”). (Where OCA stands for “Optimal Currency Area”) 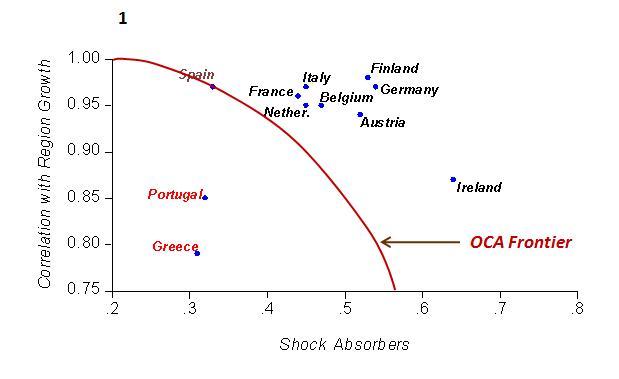 But European experience, much like the US experience (which is not burdened by “treaty straightjackets” or “German meanness”), is even more consistent with a Casselian (Gustav Cassel) view of the world in which again, according to Doug Irwin:

Unlike Keynes or Hayek, Cassel explained both how a country could get into a depression (deflation due to tight monetary policies) and how it could get out of one (monetary expansion).

Present day inflation targeting certainly makes outright deflation something rare, but monetary action, independently, continues to have a strong effect on nominal spending (aggregate demand). In this case it is not inconceivable that with the appropriate monetary policy you could even get “expansionary austerity”!