And has no idea of what he´s talking about when answering questions about NGDP targeting. In a recent Q&A:

Q. Are you concerned such a policy (NGDPT) wouldn’t work or maybe it works but then we face higher inflation expectations for a long time and it is self defeating long term?

GH. Actually, it’s a bit of both. In the near term, it’s hard for me to imagine that it would work much differently than what the Fed is currently doing, which isn’t exactly a booming success. And then in the longer term, I would worry about inflationary expectations becoming unhinged. And I think that’s something the Fed would find very difficult to reverse.

A continuation of a negative real federal funds rate and the increase in money growth accompanying it raises the risk of increasing inflationary expectations, a costly mistake to fix.

As soon as he wrote, the floor fell off from under NGDP, the dollar began to climb against all currencies and oil and commodity prices began a strong downslide!

From the moment he wrote, all nervous about inflation expectations increasing – after all MP was “stimulative” with the FF at 2% – this is what happened to NGDP and 5 byearinflation expectations (monthly from the Cleveland Fed). Note that despite the climb in NGDP over the last couple of years it is weeeell below any reasonable trend level! 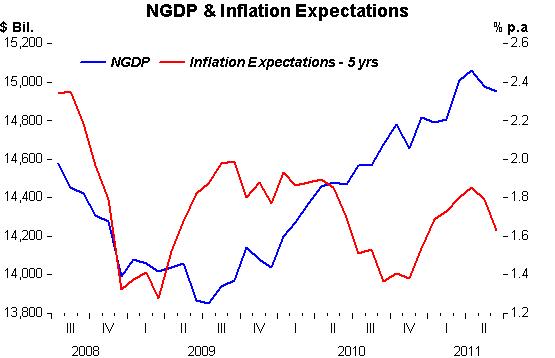 Now, imagine if the Fed had done what Hubbard thought was right back in July 2008; maybe a couple of trillion dollars less NGDP and unemployment at 15%? And he has the gall to say that what the Fed is currently doing is not a “booming success”?

Krugman has put a post today that shows why inflation expectations have not become “unhinged”. This is a version of his graph: 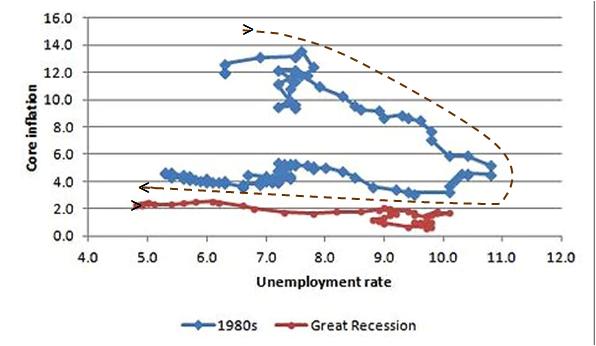 And this is Krugman:

I thought this slump would produce a “clockwise spiral” like the 80s recession, and for that matter like what happened in the 70s (not shown). That is, among other things, what textbook adaptive-expectations Phillips curves say should happen. So I thought we might well be into deflation by this point. Instead, while you can see a clockwise spiral, sort of, if you squint, it has been “scrunched” as if it’s bouncing off a hard surface at or near zero.

And that’s almost surely exactly what has happened. Downward nominal rigidity — the great difficulty of actually cutting wages and many prices — is now obvious. And research into PLOGs — prolonged large output gaps — shows that this is a general phenomenon.

I wonder, if all this was such a big surprise, what the heck was discussed in all the conferences over the last 12 years on “Monetary Policy in a Low Inflation Environment”? I bet Scott Sumner od David Beckworth were never invited!