To all MM´s (or M&M´s): hold your shields high. The stones will soon be thrown our way. The era where we were the stones is OVER. We´ve become the “conventional window”!

October 2011 will be remembered as the month that NGDPT “crashed the party”. A great helping hand was given by Goldman Sachs who, in the space of a few days wrote two pieces promoting NGDPT! That certainly helped bring onboard some VIE (Very Important Economists) like Krugman and DeLong. No matter that for the past few years all those arguments and much more had been written, discussed and illustrated by a handful of people, with Scott Sumner spearheading the pack. But no complaints or feelings of frustration. We are “politically correct”. We don´t discriminate.

In the second NGDPT piece GS takes on the experience of Sweden, which left the gold standard and adopted a price level target (PLT):

The record suggests that Sweden’s experience with price level targeting was successful: consumer prices stabilized, real interest rates declined sharply and real GDP stopped contracting shortly after the adoption of the price level target (see exhibit above). Compared to most other countries, Sweden fared relatively well in the 1930s. 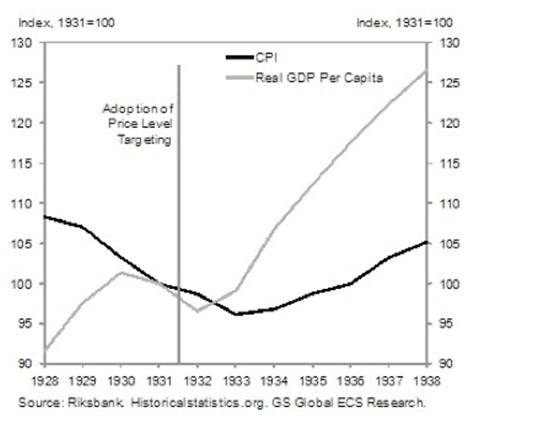 From the figure below, one sees clearly that the same pattern was repeated in the US two years later when FDR delinked from gold and adopted a PLT (OK, there was NIRA and other distortions that took some “icing off the cake”), but the “contour” is the same. 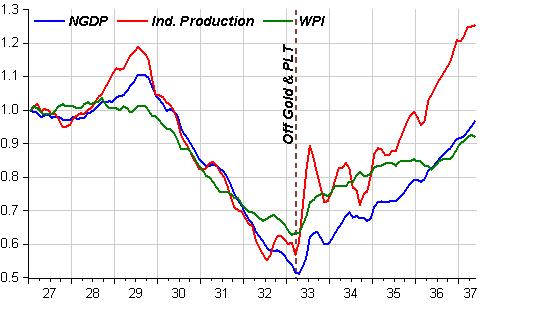 Yes. All in all, hope has risen!

Update: Things move fast. There are “newcomers” already trying to figure “how to” do it!

8 thoughts on ““When push comes to shove””