In a recent post Scott Sumner writes: “And yet I find myself once again to be very irritated by an argument against the demand-side view put forward by Cole and Ohanian”:

The main point of our op-ed, as well as our earlier work, is that most of the increase in per-capita output that occurred after 1933 was due to higher productivity – not higher labor input. The figure [at the link] shows total hours worked per adult for the 1930s. There is little recovery in labor, as hours are about 27 percent down in 1933 relative to 1929, and remain about 21 percent down in 1939. But increasing aggregate demand is supposed to increase output by increasing labor, not by increasing productivity, which is typically considered to be outside the scope of short-run spending/monetary policies.

C&O original figure is this (all data, except NGDP, from C&O):

The sensible interval is 1933-37, not 39 which reflects the 1938 “recession within the depression”. But even there there´s another “fudge”. In their research C&O argue that government employment didn´t change and farm employment dropped only in 1934, so the better measure of hours is to see what happens to manufacturing hours. This is shown below: 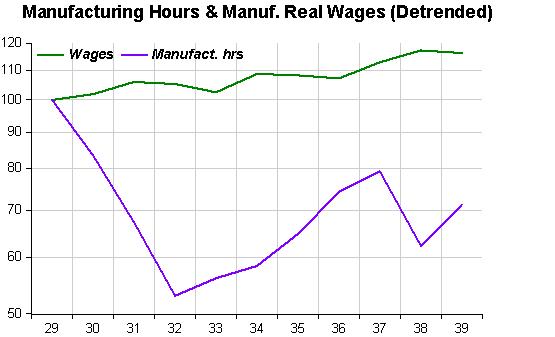 When C&O look at the picture (not in their article) containing TFP in the private non farm sector compared to total hours they get this:

Leading them to conclude that it wasn´t about increasing AD, but about higher productivity.

The point is that in either case there is strong support for the AD view of the recovery from the great depression. Note also that productivity flattened in 1936, while hours continued to increase for another year!

The final graph indicates there´s no doubt about the effect of AD with AD rising after 1933 and bringing RGDP up commensurately.

So yes, C&O were very “selective” with their dates and data to further their RBC view of the world. It seems that productivity went up due to an increase in AD, allowing a more efficient deployment of resources.

One thought on “More evidence on how Cole & Ohanian were deceptive”