Writing in late 1936 early 1937 (the article was published in 1938), Michael Palyi –
Hungarian born, former Chief-Economist of Deutsche Bank and advisor to the German Central Bank during the financial reconstruction of Germany after the hyperinflation of the early 1920´s who fled Germany in the early 1930´s when the Nazi Party ascended to power – seems to have inspired present day “conservatives”: 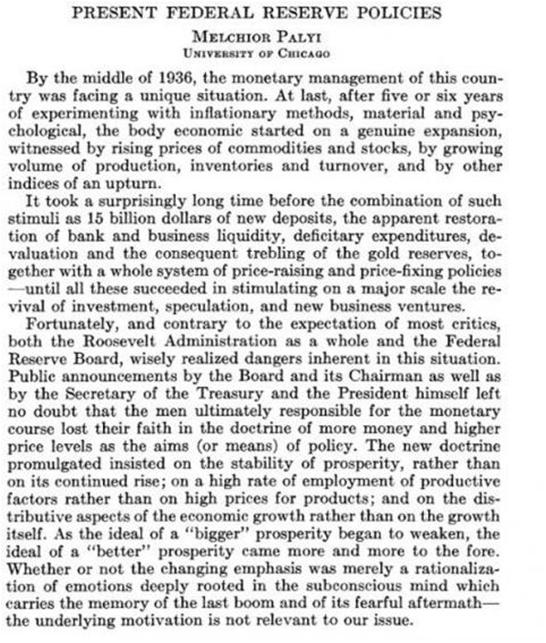 He tellingly gets several things wrong. The “experimenting with inflationary methods” only began in early 1933 after FDR became president. This was the direct result of the US leaving the gold standard and FDR targeting the commodity price level. Contrary to what Palyi writes, the effects on the economy were instantaneous. Industrial production jumped, the price level reversed its fall and nominal spending increased. NIRA was a “spoiler”, keeping employment down from higher wages. In 1936/37 the Fed tightened policy and the Treasury reduced the deficit. This was the “conventional” – a “better
prosperity” – coming to the fore. A “better prosperity”? What does it mean? But nothing that could be described as such happened because just as Palyi´s ink was drying the economy nose-dived into the second leg of the depression.