According to St Louis president Bullard:
In an interview, Federal Reserve Bank of St. Louis President James Bullard said it was “reasonable” to expect the central bank would slowly begin to unwind its easy-money policies before the end of the year.

“We do have rising inflation and rising inflation expectations making me a little bit nervous,” Bullard said. “We’ve got to start taking some steps to start to tighten monetary policy as we continue on through 2011 to make sure we don’t allow inflation to get away from us.”

With interest rates close to zero for more than two years some Central Bankers get nervous. It appears they are not working, and they hate to give that impression to the public.

He (and others) must be delusional, after being too long in the “zero interest rate desert” with no water. President Bullard: Please tell us where the “inflation that makes you nervous” can be seen.

Some pictures that reflect the situation:

Third: What´s going on with wages & salary growth? Went down and stayed down.

What about the employment situation? A “catastrophe”! 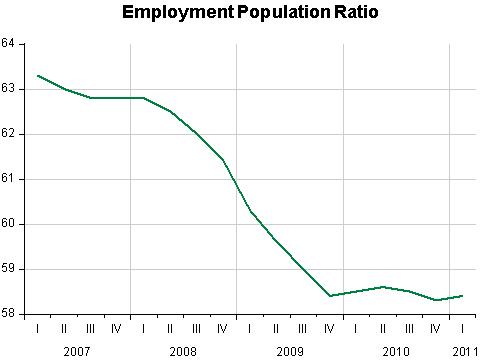