According to Scott Sumner:

Throughout history, only a tiny number of economists have intuitively grasped the incredible power of monetary stimulus (even at zero rates) and also understood the need for monetary stimulus when NGDP is inadequate.  Irving Fisher was one and Milton Friedman was another.  Lots of people are aware of the power of monetary policy.  Lots of people understand the need for stimulus.  But damn few can see both.  And that’s why we are where we are.

Christina Romer´s (CR) piece on the NYT this last weekend was widely cited in the blogosphere. One blogger, Steven Williamson (SW), wrote a strong critique. CR writes about empiricists and theorists who, according to SW, refer to the old Doves and Hawks characterization or the “good guys” and the “bad guys”, respectively.

That´s not the right way to tackle the problem. It just gives rise to unproductive discussion. But CR has been ambivalent over time. The abstract to her 1992 article reads:

This paper examines the role of aggregate demand stimulus in ending the Great Depression. A simple calculation indicates that nearly all of the observed recovery of the U.S. economy prior to 1942 was due to monetary expansion. Huge gold inflows in the mid- and late-1930s swelled the U.S. money stock and appear to have stimulated the economy by lowering real interest rates and encouraging investment spending and purchases of durable goods.

The finding that monetary developments were crucial to the recovery implies that self-correction played little role in the growth of real output between 1933 and 1942.

This shows she´s a true believer in the power of monetary policy. She also understands the need for monetary stimulus when aggregate spending (NGDP) is inadequate. In fact, she´s one of Scott Sumner´s “damn few”. But when Chair of the CEA she wrote:

One crucial lesson from the 1930s is that a small fiscal expansion has only small effects. I wrote a paper in 1992 that said that fiscal policy was not the key engine of recovery in the Depression. From this, some have concluded that I do not believe fiscal policy can work today or could have worked in the 1930s. Nothing could be farther than the truth. My argument paralleled E. Cary Brown’s famous conclusion that in the Great Depression, fiscal policy failed to generate recovery “not because it does not work, but because it was not tried.”

Her argument appears to be a justification for getting behind the fiscal stimulus plans likely concocted by Larry Summers and adopted by Obama. (Note: Krugman recently used the words of E. Carey Brown as his own). Just like an army in battle, if you don´t concentrate your focus and open up your flanks, you are going to have a hard time trying to win the battle (and may even lose it).

In her NYT piece, CR mentions Price Level Targeting (PLT) which, unlike Inflation Targeting (IT), has a memory (you compensate for previous deviations from trend). But PLT shares some of the important deficiencies of IT, namely the frustrating effort to choose the “right” price index. In his post, for example, SW uses the headline PCE and shows that it´s level at present is higher than almost any trend path you pick!

In 2005 Greenspan coined a great expression: “Appropriate Monetary Policy”. It´s “just” a question of giving it operational meaning, which could be: “NGDP level targeting”. Is this likely to happen? David Beckworth is “putting pressure”.

CR made the strategic mistake of couching her arguments pro “empiricists” in Phillips Curve terms. SW picked up on it immediately. But Phillips Curve arguments don´t need to be evoked. Inflation can rise or fall with unemployment. What transpires depends on the kind of shocks that are hitting the economy at the particular time and, most importantly, whether MP is geared (explicitly or implicitly) to stabilize nominal spending.

The Hawk/Dove – Bad Guys/Good Guys “debate” revolves around the dangers to expectations. Usually this is associated with commodity and oil shocks:

The output gap and the unemployment rate are still around 2 standard deviations away from their averages. Capacity utilisation may be a little tighter, because of the collapse in capital investment during the recession, but it is certainly not in danger territory. So why contemplate tightening monetary policy?

The most obvious reason is of course the rise in commodity prices, which central bankers are now realising will take headline inflation above 3 per cent fairly soon. But while this appears to be a reason for serious concern at the ECB, that is not obviously the case at the Fed. Mr Dudley does seem to think that part of the rise in commodity prices may prove permanent (because of the growth of demand from China and India), but he argues that the relatively low rate of core inflation in the US, and the relatively wide margin of spare capacity, will protect the low rate of inflation in the US better than elsewhere.  But that does depend, he says, on ensuring that inflation expectations remain well anchored.

But only one thing “anchors” expectations and that is Fed credibility. And the Fed can be just as credible if it targets inflation or if it level targets aggregate spending. Since the Fed never targeted anything explicitly, how come it possessed credibility?  I´ll argue this by examining what happened when the Fed had no credibility. Figure 1 shows how things developed over the period that became known as “Great Inflation” – from around 1965 to 1979.

Clearly, during this period inflation responded to nominal spending growth, with RGDP growth highly volatile around a constant mean. Figure 2 shows how things evolved during the “Great Moderation” period (which comes to an end in 2007).

During this period (up to 2007), RGDP growth responded to spending (NGDP) growth while inflation remained low and stable.

Lesson: If the Fed keeps nominal spending growth stable around a trend path, inflation will most likely remain low and stable and RGDP growth will evolve close to “potential”. The Fed will have credibility!

What changed from the 1970´s to the 1980´s, 90´s and 00´s? The skeptics say that it was “luck” in the guise of smaller shocks. Luck is always important, but I believe you have to work hard to be “lucky”. Maybe it was the case that MP in the 20 plus years to 2007 was such that it “stopped” shocks from propagating!

Look at the QTM: MV=PY. For PY (NGDP) to remain stable, MV has to be such that M compensates changes in V.

Figures 3 & 4 illustrate two opposing situations, both reflecting “bad” MP. Figure 3 shows that in the 1970´s MP was inflationary in the sense that a fall in money demand (rise in velocity) was accompanied by an increase in M.

Figure 4 shows that MP in 2008-09 was deflationary in the sense that an increase in money demand (fall in velocity) was accompanied by a decrease in M! 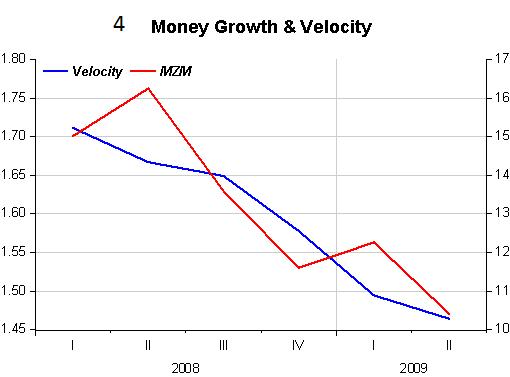 To get the economy going again it´s not just a question of growth. The economy has to be brought back to a “sensible” level path.  IT will not do it because during the transition inflation may go up above “target”.

In his first leg of Congressional Testimonies Bernanke didn´t say anything that might lead one to expect that changes in the conduct of MP could occur. In fact he tried to allay concerns about the ability of the Fed to restrain MP in the future:

My colleagues and I continue to regularly review the asset purchase program in light of incoming information, and we will adjust it as needed to promote the achievement of our mandate from the Congress of maximum employment and stable prices. We also continue to plan for the eventual exit from unusually accommodative monetary policies and the normalization of the Federal Reserve’s balance sheet. We have all the tools we need to achieve a smooth and effective exit at the appropriate time.