The Weekend Interview in the WSJ talks to Charles Plosser. It´s revealing.

He certainly doesn´t believe in “stuff like that”. After all, as one of the major proponents of Real Business Cycle theory (RBC), Plosser does not believe in the traditional view that takes long term growth as something smooth and slowly changing that could be analyzed separately from cycles (the ups and downs of everyday life). To him (and to to RBC theorists in general) the economy should be viewed as an optimizing dynamic system constantly buffeted by shocks. In this sense, what is popularly called cycle is nothing more than the manifestation of the economy´s search of its new equilibrium growth path!

So Plosser is being “internally consistent” when he says:

Mr. Plosser doesn’t see a deflation risk for the U.S. economy right now. Even those who were worried about deflation six months ago, he says, have begun to change their tune. That means that, with moderate GDP growth and low inflation in the mix, the only thing left as an excuse for QE2 is high unemployment. Can lax monetary policy change that picture?

Mr. Plosser’s answer is unequivocal: This mess was caused by over-investment in housing, and bringing down unemployment will be a gradual process. “You can’t change the carpenter into a nurse easily, and you can’t change the mortgage broker into a computer expert in a manufacturing plant very easily. Eventually that stuff will sort itself out. People will be retrained and they’ll find jobs in other industries. But monetary policy can’t retrain people. Monetary policy can’t fix those problems.”

Being consistent doesn´t mean being right. Plosser doesn´t care about “levels”, only “growth rates”. And in thinking so, he disregards important information. In this recent post I illustrated the significance of the “level” of spending in determining the rate of unemployment or level of employment. The take away was that even if spending growth resumes its trend rate, unemployment will remain high and there will be little gain in the level of employment. To “get things going”, spending growth has to be sufficiently strong to close the spending “hole” which was opened by the Fed´s “great monetary error”.

It’s illustrative to see what happened long ago in history, when the Fed also “cared only about growth”. The figures below show what transpired during the 1930´s. 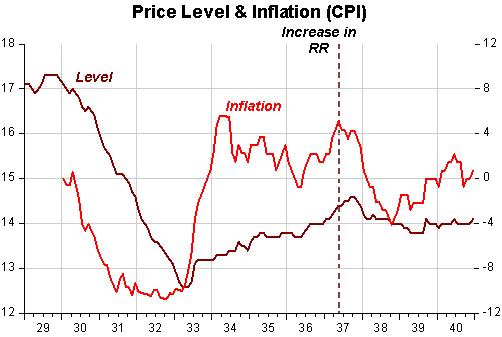 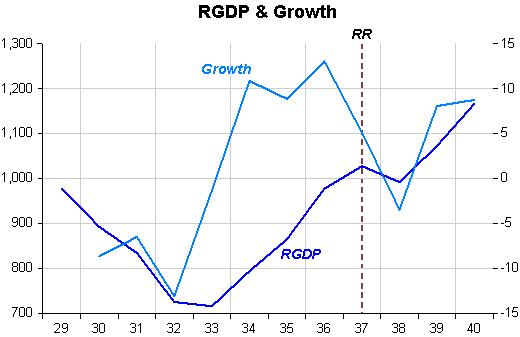 In 1936, when inflation became positive again, and real growth was robust, the Fed “took cover” and raised required reserves to “cool” things up. No matter that the price level was far below the level of 1929 and that RGDP had barely regained its 1929 level. Employment was falling but was still high (reflecting policy induced distortions).

An interesting story of the time is told by Anasthasios Orphanides. In March 1937, just before the final leg of the increase in required reserves was implemented, Marriner Eccles, the Fed Chairman said:

Recovery is now under way, but if it were permitted to become a runaway boom it would be followed by another disastrous crash.

Several months later, halfway through the recession, at the November 1937 meeting John Williams, a Harvard professor, member of the Fed board and its chief-economist said:

We all know how it developed. There was a feeling last spring that things were going pretty fast … we had about six months of incipient boom conditions with rapid rise of prices, price and wage spirals and forward buying and you will recall that last spring there were dangers of a run-away situation which would bring the recovery prematurely to a close. We all felt, as a result of that, that some recession was desirable … We have had continued ease of money all through the depression. We have never had a recovery like that. It follows from that that we can’t count upon a policy of monetary ease as a major corrective. … In response to an inquiry by Mr. Davis as to how the increase in reserve requirements has been in the picture, Mr. Williams stated that it was not the cause but rather the occasion for the change. … It is a coincidence in time. … If action is taken now it will be rationalized that, in the event of recovery, the action was what was needed and the System was the cause of the downturn. It makes a bad record and confused thinking. I am convinced that the thing is primarily non-monetary and I would like to see it through on that ground.

A “cover up”! But these guys are the predecessors of Plosser! They also focused on “growth” in prices and output. As Scott Sumner likes to say: “The real problem is nominal”.